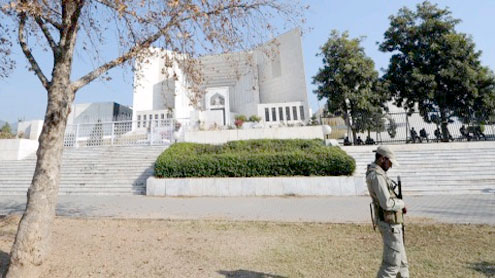 The Supreme Court restrained the caretaker government on Tuesday from disbursing development funds because of apprehensions that the action might influence the coming elections.

“Only elected representatives should disburse development funds. Therefore, the caretaker government should not grant any amount until the May 11 elections,” a three-judge bench headed by Chief Justice Iftikhar Muhammad Chaudhry said.The order was issued after Finance Secretary Dr Waqar Masood informed the court that Prime Minister Mir Hazar Khan Khoso had issued instructions for the release of development funds because he wished to help the flood-affected people in Balochistan. The court had asked about the release of funds by the prime minister.

The court objected to the move and said the initiative taken by the prime minister would send a wrong message to people during the election campaign.The court was hearing a suo motu case about doling out of billions of rupees by former prime minister Raja Pervez Ashraf for development projects in various constituencies under the People’s Works Programme II. A total of Rs42.486 billion was released for development on the instructions of the former prime minister — Rs25bn more than his annual discretionary fund.

These funds were distributed among 69 lawmakers, including former prime minister Yousuf Raza Gilani’s sons Ali Musa and Abdul Qadir. Former premier Gilani, after his disqualification from the post, also got Rs25 million.Moonis Elahi received Rs50million and his father Chaudhry Pervez Elahi, Chaudhry Shujaat Hussain and Wajahat Hussain received a total of Rs1bn. Sheikh Waqas Akram got Rs30m and the Shirazi family of Sindh Rs100m.Ashraf released Rs2.5bn for his own constituency.The court asked the finance secretary to explain whether the Public Procurement Regulatory Authority Rules had been followed in the disbursement.

The secretary will also explain before the court on May 6 whether the PWP II funds can be distributed among ‘notables’ and members of the provincial assemblies.The managing directors of the Sui Southern, Sui Northern and Pakistan Electric Power Company were asked to submit reports declaring whether the electricity and gas schemes had been executed transparently in accordance with the rules and regulations.The MDs will also explain the status of the development schemes after the release of the amount.

The court expressed its displeasure when it was informed that Rs30bn had been diverted from Public Sector Development Programme projects of the Water and Power Development Authority, Lowari Tunnel and Higher Education Commission without the consent of the departments concerned.It asked whether the country did not need money for electricity generation and whether the HEC had surrendered the funds allocated to it.The finance ministry will also explain whether the allocation of funds by the previous PPP government for development schemes after March 10 was a violation of the Election Commission of Pakistan’s Jan 21 order banning diversion of development funds.

A representative of the Accountant General of Pakistan Revenue (AGPR), Tahir Mahmood, told the bench that Rs22bn had been allocated for the PWP II in the current year’s budget and the amount had been increased to Rs52bn by diverting Rs30bn from other ongoing projects. Of the PWP II fund, around Rs42bs has been released to various departments.The court also inquired about any mechanism in the finance ministry to ensure that funds were utilised for the schemes for which they were allocated. – PT