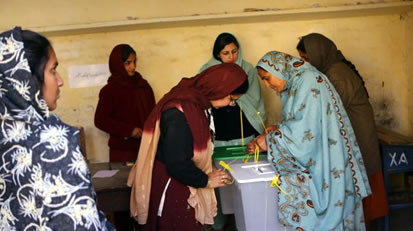 ISLAMABAD: Religious scholars form the Pakistan Ulema Council have issued a Fatwa which declares the non-casting of vote a sin, adding that voting is an Islamic responsibility.

The Fatwa further states that women have equal rights to vote, adding that it is not religion that bars them from voting but rather the feudal system. Chairman Pakistan Ulema Council, Tahir Ashrafi said that misusing the name of Islam should be stopped immediately.

The decree from the competent Ulema Council has come at a time when Pakistan is heading towards May 11 polls amid a wave of terrorists attacks in its three of four provinces and threats to political parties from militants outfits. It is pertinent to mention here that the outlawed Tehreek-e-Taliban Pakistan earlier this month had also declared democracy ‘un-Isalmic’. – Thenews

SC refuses to remove journalists’ names from its website

SC refuses to remove journalists’ names from its website