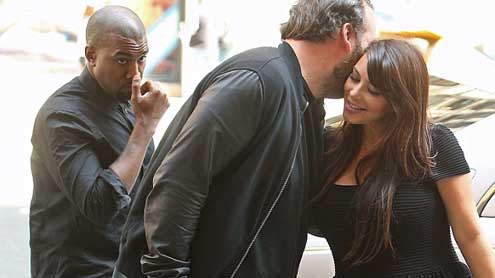 He may not be the most affectionate when the couple are spotted out in public together.But when it comes to other men getting too close to Kanye West’s girlfriend Kim Kardashian, it seems the rapper’s jealous side kicks in.

The 35-year-old looked none to pleased when a friend of the pair planted a kiss on the reality star’s head right in front of him during an outing in New York on Wednesday.Kanye’s blood looked like it was about to boil as Kim happily obliged, leaning her face and head in for the affectionate greeting.The Touch The Sky star was left scratching his nose and looked extremely uncomfortable as he witnessed the meet and greet.

Kim meanwhile happily lapped up the attention, smiling as she leaned in close to her pal.The celebrity couple were heading into a studio after earlier leaving the Mercer Hotel.For the outing, Kim wore a pretty black knit voluminous mini dress similar yet a whole lot better to a pink Lanvin frock she had slipped into last month.The black hue somewhat slimmed down the raven-haired star’s physique and featured a higher bust line which made her appear less top heavy.The darker shade also seemed to make her large baby bump disappear, despite the material sitting tight across her waistline.

Kim teamed her dress with a pair of lace cut-out ankle booties and a large black crocodile skin clutch.Once again she wore her hair out in a straighter style and shielded her eyes with large black sunglasses.After the meeting at the studio, the pair emerged from the building to usual fan fare.And as Kim got distracted by the paparazzi, one clever admirer saw an opportunity to get his own snap of the power couple.But as he jumped in front of the duo, he was quickly intercepted by their burly bodyguard who shooed him away and gave him a firm talking to.On the way back to their hotel, Kim received a gift in the form of a red rose.

It is unknown whether the pretty bloom was given to her by a fan or her beau, but she happily held it in her hand as they crossed the road.Kim and Kanye were also spotted heading out together on Tuesday, where Kim once again slipped into a flattering black dress in a more figure-hugging style.During the outing, Kanye again showed his protective side.The rapper spotted a storm drain as his heavily pregnant girlfriend was approaching in stiletto heels and made sure she managed to steer herself past it.The evening before Kim, her bump and Kanye dined out on fine Italian cuisine to alleviate any worries of a blue Monday.

After a busy day of promotional activities in the Big Apple, the pregnant reality star was escorted to dinner by her rapper boyfriend at Babbo in Manhattan.Kim was spotted hand in hand with her man as the pair headed out for a romantic evening, following her red carpet turn at the E! 2013 Upfront event.Earlier, Kim and Kanye were photographed out in New York together before she later rushed off with her family for promotional duties at the network event, which airs the hugely popular Kardashian reality shows.She displayed her curves in a plunging satin tuxedo-style coat dress which she wore to the Upfront event held at The Grand Ballroom at the Manhattan Center. – DailyTimes