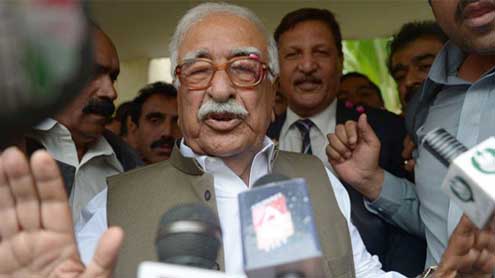 ISLAMABAD: Prime Minister retired Justice Mir Hazar Khan Khoso on Tuesday ordered postings and transfers in the federal bureaucracy and brought back Abdul Khaliq to the finance ministry as its special secretary.

Mr Khaliq was additional secretary (budget) in the finance ministry, when the caretaker government took charge of the country. He was later made officer on special duty (OSD) by the prime minister apparently in response to media criticism of the ministry for releasing billions as development grants to former members of the National Assembly.Former prime minister Raja Pervez Ashraf is facing charges of diverting funds meant for other sectors towards his discretionary fund which he later on used for development schemes in his home constituency.

Tariq Peerzada, chief commissioner of Islamabad, has been posted as additional secretary of finance. Jawad Paul, who was with the National Institute of Public Policy, Lahore, will now be chief commissioner of Islamabad.Mohammad Asif Sheikh presently posted in the Establishment Division has been sent to the Economic Affairs Division as additional secretary.All the changes have been made after the former interior secretary, Khawaja M. Siddiq Akbar, was recently appointed as principal secretary to the prime minister, and had also been given the additional charge of Cabinet Division.Nargis Sethi, secretary of Cabinet Division, is currently on leave. – Dawn