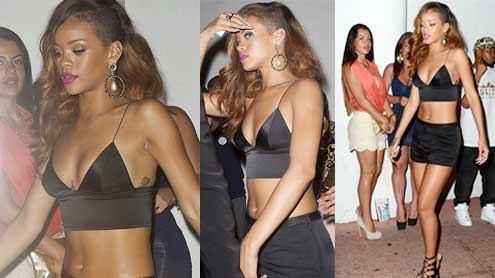 Rihanna certainly had an action-packed Saturday.And she made sure to dress the part with three costume changes for the day’s events, celebrating ‘weed day’ on April 20 or better known as 4/20.

But her final ensemble for the evening’s festivities was the skimpiest and most flattering of them all as she headed to a nightclub in Ft. Lauderdale, Florida, after a crowd-pleasing performance for her Diamonds world tour. The Barbadian songstress donned strappy stilettos for the night on the town.The black footwear added more than a few inches to her height and nicely showcased her sun kissed legs after her sweaty dance routine onstage just hours before.The 25-year-old slipped her lean body into a matching pair of black satin shorts and a midriff baring bralette top.

She was certain to make sure her accessories caught just as much attention as her toned body.The Diamonds (In The Sky) recording artist also wore statement earrings as she sported pink lipstick and white nail polish.And it was a good thing that Rihanna donned the daring outfit as she got a surprise visit from a certain South American Victoria’s Secret Angel just prior to her nightclub appearance.Adriana Lima popped by to congratulate the singer and blow a few coy kisses to the camera as the two posed for some playful snaps backstage.

The Brazilian model attended the concert in a ripped vest and leather leggings.Rihanna playfully captioned a snap of the two of them: ‘Only bad b*****s get backstage on the DIAMONDS World Tour  nobasiczone.’ In the photograph Lima can be seen affectionately kissing the singer’s cheek. After her dance heavy performance onstage, the adventurous singer indulged in a 4/20 treat, as evidenced by her Twitter, where she posted a photograph of a cake in the shape of a marijuana leaf.

‘What did I do to deserve the epicness that is my fans??!!’ she wrote in a caption accompanying the photograph, indicating that the dessert came from an admirer.The singer toasted her fans with a celebratory smoke, writing, ‘#420 it’s a celebration b******!! Thank you to all my ft. Lauderdale and Miami fam that came through #DWT #backstageLife.’The afternoon prior to her evening’s performance onstage, Rihanna unleashed a slew of pouty pictures on Instagram.

She posted a series of heavily filtered shots onto the picture sharing website, including one of her on a bicycle, a far cry from her sexy moves onstage.For one picture the Umbrella singer sat posing with her pals, writing: ‘Our #420 on #420 #clique’, referring to the day – a term founded by a group of High School students in 1971.Later on, for the onstage antics, Rihanna stunned in a pair of embroidered black hotpants, a sheer long-sleeved tunic layered over a studded bra and thigh-high leather boots with gold detailing.The star’s bondage-inspired stage costumes were designed by Givenchy’s Riccardo Tisci.The Umbrella diva, known for her changes in hair colour, has settled on a mottled auburn shade for her Diamonds World Tour. – DailyMail