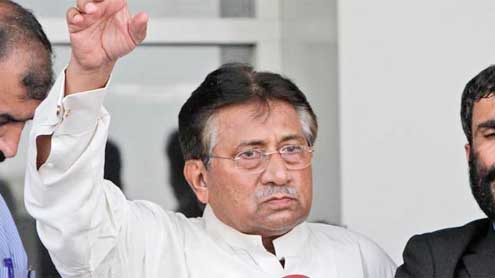 ISLAMABAD: General (retd) Pervez Musharraf’s farmhouse at Chak Shahzad on the outskirts of Islamabad was declared sub-jail on Friday after the former military ruler surrendered himself to the police.

He moreover appeared in the court of a judicial magistrate in Islamabad after which he departed for his farmhouse, a sub-jail at present.The court ordered a two-day-long transit remand of the retired general who has also been directed to appear before an anti-terrorist court within two days’ time.Musharraf had been on the run after fleeing from the premises of the Islamabad High Court in the wake of the cancellation of his bail on Thursday.  Twenty-four hours had passed since Musharraf’s escape from the IHC.Musharraf bail was cancelled in the judges’ detention case by IHC’s Justice Shaukat Aziz Siddiqui on Thursday.

In a written judgement printed in English, the IHC ordered that: “He (Musharraf) be taken into custody and dealt with in accordance with law.”Earlier on Thursday, All Pakistan Muslim League’s secretary general Mohammad Amjad said: “If his (Musharraf’s) house is declared a sub-jail…a request for bail after arrest would be submitted.”Amjad moreover said that even if Musharraf was arrested, the APML would take part in the May 11 election.

The case is based on an FIR against the retired general registered in August 11, 2009 on the complaint of Chaudhry Mohammad Aslam Ghumman advocate.He had asked the police to initiate legal proceedings against Musharraf for detaining over 60 judges, including Chief Justice Iftikhar Muhammad Chaudhry, after proclamation of a state of emergency in the country on November 3, 2007.The case is one of three against Musharraf in Pakistani courts. He is also accused of involvement in a conspiracy to murder Benazir Bhutto in 2007 and over the 2006 killing of Baloch nationalist leader Akbar Khan Bugti.

Musharraf returned to Pakistan last month after nearly four years of self-imposed exile to contest the May 11 general election.Election officials had barred Musharraf from running for the National Assembly earlier this week, effectively derailing his attempts to regain a place in politics by standing at the polls.Although Musharraf’s legal battles have provided an electrifying sideshow in the election race, he commands scant popular support and the outcome of the drama is unlikely to have much impact on the final results. – Dawn