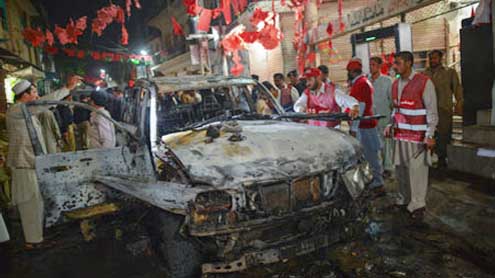 Senior Awami National Party (ANP) leader Ghulam Ahmed Bilour, who served as railways minister in the outgoing government, escaped the Peshawar bombing with cuts and bruises. He was shown on television footage with blood splattered on his trousers after the attack. “Six persons died on the spot while others lost struggle for life while on their way to hospital or in hospital,” a spokesman for the Lady Reading Hospital told media. The attack comes days after ANP leader Asfandyar Wali Khan wrote to the Election Commission of Pakistan protesting the withdrawal of security from senior leaders after completion of their government’s constitutional term.

“As Ghulam Bilour arrived for the corner meeting in a vehicle the suicide bomber blew himself up,” a leader of ANP leader told Media. “The people were moving to receive the Bilours when the explosion took place,” he added. Police said it was a suicide attack. Ghulam, whose brother the late ANP leader Bashir Bilour was assassinated by the Taliban last year, became an insurgents’ favourite after posting a $100,000 ransom for the death of a film-maker behind a controversial anti-Islam movie last year.

The Taliban quickly claimed responsibility for the attack, but apologised for injuring Bilour, saying it had been targeting his nephew, Haroon. “We apologise to Ghulam Bilour because we announced an amnesty for him,” Taliban spokesman Ehsanullah Ehsan told AFP by telephone from an undisclosed location. Haroon is the son of slain ANP leader Bashir, the elder brother of Ghulam who was killed in a suicide attack at a political meeting in Peshawar on December 22.

The Taliban has directly threatened the ANP and its outgoing coalition partners, the PPP and the MQM which are perceived as secular. Up to six kilogrammes of explosives along with splinters and ball bearings were used in the bombing, officials said. “We have found the feet of the bomber,” police official Malik added. In another election-related attack, as many as four people, including the son, brother and nephew of Pakistan Muslim League-N Balochistan chapter President Nawab Sanaullah Zehri, were killed and 30 others injured when his convoy was attacked with a remote-controlled bomb in Zehri, on Tuesday.

Talking to this correspondent, a Levies official in Zehri said that Nawab Sanaullah Zehri was heading from Anjeera to Zehri as part of his election campaign in a convoy comprising as many as 30 to 35 vehicles. “When the motorcade reached Ghat Bulbul Tarsani, a remote-controlled bomb which was attached to an overpass went off,” he said and, adding that it completely destroyed a vehicle and killed on the spot as many as four people – the son of Sanaullah Zehri, Mir Sikandar Zehir, his nephew Mir Zaib Zehri and his younger brother Mehrullah Zehri and their gunman. Moreover, 30 people were injured in the attack and five vehicles were damaged.

Police and Levies personnel shifted the injured and dead to the District Headquarter Hospital Khuzdar. The dead bodies were handed over to the heirs after legal formalities. No group had claimed the responsibility for the attack until the filing of this report. Balochistan Chief Minister Nawab Ghaus Bakhsh Khan Barozai has strongly condemned the attack and expressed his deepest concerns over the loss of human lives. The chief minister asked for a report from the authorities regarding the attack. He said that it was an attempt to sabotage the upcoming elections in the province.

Barozai also offered his sympathy and condolences over the attack and loss of lives to the PML-N chief Sardar Sanaullah Zehri. All the political parties have condemned the attack on the convoy of the PML-N chief.National Party President Dr Abdul Malik Baloch, Balochistan National Party-Mengal President Sardar Akhtar Mengal, leader of PML-N Sardar Yaqoob Nasir, Abdul Qadir Baloch, BNP-M Senior Vice President Jahanzaib Jamaldini, National Party member Tahir Bizeno and others also condemned the attack. Meanwhile, a low-intensity bomb went off on Tuesday in the residence of Pakistan People’s Party’s candidate for NA-1 in Peshawar, Zulfiqar Afghani, causing no loss of life or damage to property, police said. “The bomb was placed on the roof of the residence of Zulfiqar Afghani and detonated with a remote control,” Gulbahar Police Station said. – DailyTimes