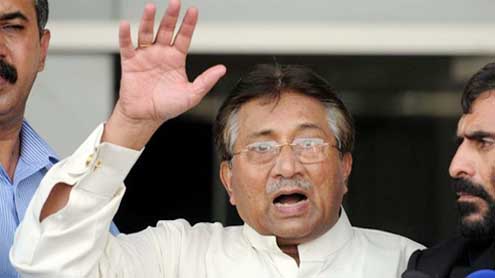 CHITRAL: Former president Gen (Retd) Pervez Musharraf, who had returned to Pakistan after five years of self-imposed exile to contest the May 11 polls, has been kicked out of the election race.

The former military strongman’s nomination papers were also rejected on Tuesday from NA-32 Chitral, after being earlier disqualified from three other constituencies.Earlier in the day, an election tribunal had decided against an appeal filed by Musharraf challenging the returning officer’s rejection of his nomination papers for NA-48 (Islamabad-I).

The returning officer had rejected Musharraf’s nomination after objections were raised on it saying the retired general had subverted the Constitution as army chief and had illegally placed judges under house arrest.Musharraf’s appeal for NA-139 (Kasur-II) was also rejected by an election tribunal in Lahore. The tribunal said the former president had abrogated the Constitution thrice and thus did not qualify to contest in the coming general election. – Dawn