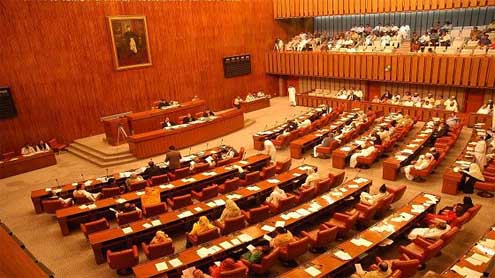 ISLAMABAD: The country’s main political parties taking part in the May 11 elections will get the first opportunity to make the caretaker prime minister and his cabinet team accountable for their acts when the Senate goes into session today (Monday).

Having no friends in the house, the caretaker ministers can face a difficult time in the Senate where there will be no concept of the treasury and opposition benches in the absence of an elected government.According to reports, when contacted famous senators they said technically there would be no leader of the house and no opposition leader in the Senate when it would meet. The leader of the house was normally appointed by the prime minister to represent him in the upper house of parliament.

The Senate Secretariat on Saturday issued a 15-point agenda for today’s session that included introduction of two bills, five motions and six resolutions.The Awami National Party (ANP) and the PPP have already announced that they would seek a clarification from Interior Minister Malik Habib Khan on his controversial remarks in which he had praised PML-N chief Nawaz Sharif.The parliamentary reporters and experts are keen to watch the reaction of the PML-N in the Senate when this issue would be raised by the two former ruling coalition partners. – DunyaNews