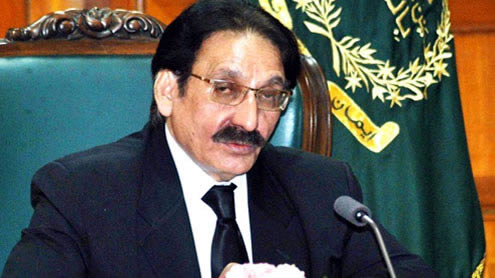 The CJP gave these remarks while presiding over a three-member bench hearing the Adiala missing prisoners’ case on Thursday. During the hearing, Attorney General (AG) Irfan Qadir said an extraordinary situation prevailed, therefore, civil powers had been delegated to the army. “National security is in jeopardy and an emergency-like situation has gripped the country. Therefore, it had become essential to deploy army there to restore peace.” The AGP said the president and parliament could legislate per constitution. “President wields powers to enact legislation like parliament.”

CJP Iftikhar Chaudhry said it “was not allowed even during martial law to suspend fundamental rights”. The AGP said the president was part of parliament and he was not accountable to any court of for his deeds. He is entitled to legislate under Article 56 of the constitution. The CJP said, “We have never accepted clipping of powers of the courts. In Karachi, other areas and Balochistan the situation is worsening. Has discriminatory treatment has not been meted to FATA by promulgating law therein?” he questioned.

The AGP said, “We cannot inflict any damage on the country by showing leniency towards militants. Loyalty to the country is above law and constitution too. By virtue of it, law and constitution go on changing. No limit is set in the US for keeping anyone under detention. It continues unless the detained person is cleared.” The CJP said people were being detained beyond the law and in certain cases, even legal parameters were not met. Giving details about the accused who were arrested from various areas, Qadir said two convoys of the army were attacked and the accused proceeded to Lawara Mela. “Suicide jackets were also recovered from them and they were working against national security.”

The CJP said no evidence of external attacks had come to light. “Government officers, rather than army officers, have been giving such statements. It is not difficult to handle the situation. It can be improved. Leave aside all things, the army should at least ask about what is happening over there. The situation will be further complicated this way. Everyone evinces interest in it that internal and external interference should come to end,” he remarked. Qadir said it stood beyond comprehension what the army should do in the war-like situation there. “Should it keep on watching people die?”

The CJP said, “You cannot do injustice with the people even in a state of war.”

Citing laws prevalent in Israel, the AGP said there was no limit to keep anyone under detention. “TADA law is in place in India. PTA stands enforced in Sri Lanka since 1979. This order was issued by the president that anyone can be kept under detention for 72 hours without registering the case. Yard protection bill and migration laws are in force in Australia which were approved by parliament. Report has to be submitted within four hours and the parliament goes through it. If any situation like eruption of war prevails in any territory, the army can be allowed to launch operation per the constitution,” Qadir submitted. – Pakistantoday