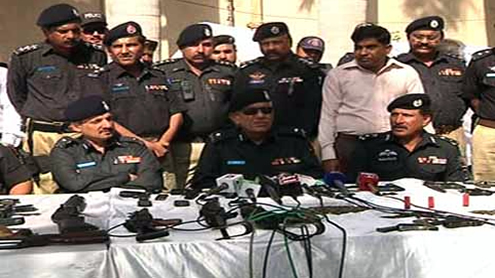 KARACHI – The law-enforcers are at odd over the existence of no-go areas in Karachi while the political parties agree that the financial hub has become a ‘territorially locked’ city where a common man can not move freely with his own free will as per the constitution.

Some of the political parties claimed that it would be impossible for them to enter the territorially locked areas to run their election campaigns. On December, 2008, the Sindh home department had issued a notification to the then Sindh inspector general of police and ordered him to take immediate measures for removal of barriers from all parts of the city. The home department had also issued instruction to all SHOs areas concerned to remove the blockades at the earliest.

The home department had issued this notification on reports of intelligence agencies that criminals had started blocking streets in the city by installing barriers to protect themselves. It was the time when the trend of installation of barriers started in Karachi and now the entire city had been locked with barriers. Chief Justice Iftikhar Muhammad Chaudhry had ordered elimination of no-go areas from the city by April 04 but the law-enforcers have yet to evolve a census what does ‘no-go area’ mean.  Some police officers claimed no-go areas did exist in the city while others claimed the entire city had become a no-go area. In short, Sindh police have devised a plan to deceive the apex court which will resume the hearing of Karachi law and order implementation case on today (April 04). On the other hand, Sindh Additional Chief Secretary Home Israr Hussain has no knowledge about the issue of no-go area.

“The entire city has become a no-go area,” said Federal Investigation Agency (FIA) Crime Circle Deputy Director and former head of FIA Special Investigation Group (SIG) Faqeer Muhammad. The political parties have cordoned off the entire city by installing barriers, Muhammad said, adding a common man could not move easily in other parts of the city due to barriers. “When a stranger visits any area, people start investigation that where have you come from and where do you want to go,” he added.

Criminal Investigation Department (CID) Anti-Extremist Cell (AEC) Head SSP Chaudhry Aslam said there was no no-go area in Karachi. “Police can enter any part of the city easily and launch operation whenever and wherever it want”, he added. “We have launched an operation in Lyari and removed all the barriers,” he claimed. When he was asked about a number of barriers installed in every nook and corner of the city, he said: “the residents have installed barriers for their security and no criminal is hiding there.”

When asked if there was no no-go-area in Karachi except Lyari, the SSP turned angry and said: “Police are conducting raids in the city. And I want to tell you we have arrested big fishes over the last many days and you would see peace prevailing everywhere in the city shortly,” he claimed. FIA is a ‘memon force’and we are ‘mard police’,” the angry CID SSP said in response to the FIA statement.

When approached for comments on no-go areas, Sindh ACS Home Israr Hussain said he had no knowledge about this issue. “I have assumed charge of my office just an hour ago,” Hussain added. “Give few days to get a rid of such issues then I will be in a position to respond to your queries,” he said. “All ‘pakhtun’ dominated areas in Karachi have emerged as no-go areas,” said a local leader of Awami National Party (ANP) Rana Gul Afridi. “Landhi, Sohrab Goth, Frontier Colony, Ittehad Town, Sultanabad, Pakhtunabad and some parts of Orangi Town have emerged as no-go areas,” Afridi added. “Police and Rangers are conducting raids in Manghopir since the last many years but they could not ensure movement of a common man there,” he alleged. “In Sultanabad and Pakhtunabad, the criminals call traders and collect extortion openly but no one can dare to go there and stop this practice,” Afridi asserted.

Police launched an operation in Lyari and removed barriers from Siraj Colony located in Moosa Lane only, said banned Peoples Aman Committee (PAC) member Zaffar Baloch. In this locality, the people who belong to Shia sect had installed barriers after suicide attacks to secure themselves but they uprooted these barriers,” Baloch added. “I think the law-enforcers have devised a plan that how to befool the apex court which resumes Karachi law and order implementation case on April 04 by launching fake operation in Pakhtun dominated areas,” Baloch blamed. – Pakistantoday