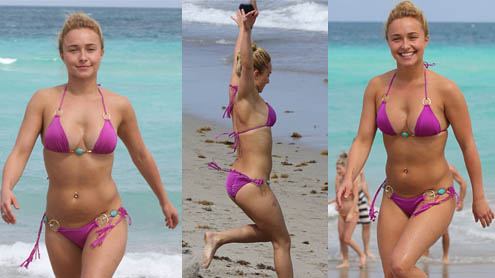 The 23-year-old Nashville starlet was all smiles as she literally threw off her striped sundress – revealing a sexy lavender two-piece – and took off for the warm Atlantic Ocean.Panettiere was positively glowing in the Florida sunshine, despite going make-up free and having her blonde locks pulled back in a messy updo.Thanks to the sexy string bikini, Hayden’s tattooed left ribcage was also on display.

The Italian phrase ‘Vivere senza rimipianti’ is technically misspelled but is meant to read: ‘Living Without Regrets.”HAPPY EASTER!’ the Heroes actress tweeted to her 302,000 followers on Sunday.The Scream 4 star began her morning over a hearty breakfast with her three gal pals – Betsy Roo and Nashville musicians Kate York and Erin McCarley.

While on holiday, one of her friends posted an Instagram of the five-foot-two actress sweetly clinging with her arms and legs around the six-foot-six athlete.According to Us Weekly, the Golden Globe nominee reconciled with the Ukrainian 37-year-old back in January and they’re now eager to walk down the aisle.

‘Looks like a summer wedding!’ a source close to the couple said.The lovebirds, who first split in May 2011 after two years together, were spotted locking lips courtside at a Miami Heat game one week ago.Hayden previously romanced Heroes costar Milo Ventimiglia and NFL player Scotty McKnight.The dolphin activist will next be seen in the drama thriller, Over the Wall, with Oscar winner Melissa Leo and Six Feet Under star Freddy Rodríguez.Nashville airs Wednesday nights on ABC. – DailyMail