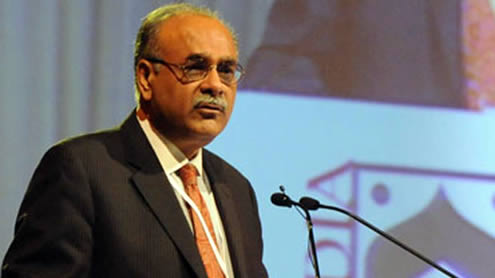 LAHORE: Veteran journalist Najam Sethi was on Tuesday selected to head up the interim administration to guide the politically important Punjab province through historic elections.

The provincial parliamentary committee to select the caretaker chief minister finally reached a consensus, approving Sethi for the post after four hectic meetings on Tuesday. Though both the government and the opposition parties had initially announced their disagreement on caretaker chief minister after holding their third consultative meeting at the Punjab Assembly Secretariat in noon, but Chief Minister Shahbaz Sharif advised the government team to continue negotiations and approve a name for the slot.

The government team members of the committee, Rana Sanaullah, Mujtaba Shuja and Iqbal Channarr, took the opposition team members of PPP and PML-Q, Major (r) Zulfiqar Gondal, Shaukat Basra and Chaudhry Zaheeruddin, into confidence to restart the negotiations and they finally reached consensus at midnight. The PML-N was hesitating to refer the issue to the election commission.

Rana Sanaullah announced the name of Najam Sethi as caretaker Punjab chief minister while talking to media after consultations with the opposition team members and said that they had made this decision in greater interest of the nation and the province. He said that they had approved Najam Sethi, who was nominated by the PPP after getting permission from the party leadership. Khyber Pakhtunkhwa, Balochistan and Sindh have already selected their caretaker chief ministers.

The six members of the parliamentary committee of the Punjab Assembly discussed four names in their meetings. PPP and PML-Q had nominated Najam Sethi and Justice (r) Zahid Hussain, while the PML-N proposed the names of Justice (r) Amir Raza and former bureaucrat Khawaja Zaheer. PPP and PML-Q rejected the nominees of the PML-N. On the other hand, the PML-N despite having no objection to the opposition’s nominees tried not to accept them. Sethi won the 1999 International Press Freedom Award of the US-based Committee to Protect Journalists and the 2009 World Association of Newspapers’ Golden Pen of Freedom Award.

The announcement about Sethi’s appointment came a day after a caretaker prime minister, retired judge Mir Hazar Khan Khoso, was sworn into office. The May 11 vote is set to mark the first time that an elected civilian government hands over to another in a country that has seen three military coups and four military rulers since its creation. – Dailytimes