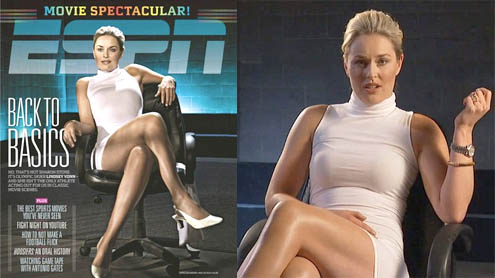 She recently made headlines after announcing she’s dating world champion golfer Tiger Woods.But long before their relationship got off the ground, Olympic skier Lindsey Vonn was causing another sensation on the cover of ESPN magazine.

In a recently unearthed edition of the publication, the 28-year-old displays her long legs in a very short and tight dress as she channels one of Sharon Stone’s sexiest character yet, Catherine Tramell, from the R rated film Basic Instinct. Baring a remarkable likeness to the actress, Lindsey dons the figure-hugging white polo neck dress, wears her blonde locks in a high updo and has smouldering make-up applied.She also sits in a swivel chair to recreate the famous ‘leg-crossing’ interrogation scene in the movie.

In an accompanying behind-the-scenes clip, Lindsey introduces herself as Stone.’Hey this is Lindsey Vonn and we are in Vail, Colorado and we are shooting a scene from Basic Instinct and I am Sharon Stone,’ she says.The sports star also recites one of the famous sexy lines from the scene in a very seductive voice.’What are you going to do charge me for smoking?’ she says coyly.Lindsey also explains how she came to channel the famous character.’I have a lot of favourite movies and one of my favourites is Gladiator, but that would probably be a little hard to reenact or recreate,’ she says.

In the interview she also refers to her now ex-husband, Thomas Vonn.’In the last couple of photo shoots, people said that I looked like Sharon Stone. So my husband and I thought what are some Sharon Stone movies? And Basic Instinct came up. And I don’t know, it just kinda seemed like it would work and here I am,’ she explains.Once she finally gets into character and is in front of the lens, the sportswoman admits that she does in fact feel and look like Stone’s character Tramell.’I have to admit, when I put on all this make-up, and my hair is all Eighties-style and I put on the white dress, I do look like Sharon Stone,’ she says with a sexy smile.

The raunchy clip and cover was recently unearthed after Woods and Vonn confirmed that they were dating on Monday.Lindsey is Tiger’s first serious relationship since his ex-wife Elin Nordegren left him after several women came out of the woodwork to reveal their affairs with the sports star.And the new couple decided to use Facebook to officially confirm their relationship status – complete with some sickeningly sweet photographs of the pair looking loved up.In his posting, Tiger, 37, said he was pleased with his two recent comeback wins on the US golf tour.

‘Something nice that’s happened off the course was meeting Lindsey Vonn,’ the famously private star added.‘Lindsey and I have been friends for some time, but over the last few months we have become very close and are now dating. We thank you for your support and for respecting our privacy.‘We want to continue our relationship, privately, as an ordinary couple and continue to compete as athletes.’Speculation that the relationship was serious grew after Tiger sent his private jet to collect Lindsey after she was injured in a horrific crash on February 5 during the Alpine Ski World Championships in Austria. – DailyMail