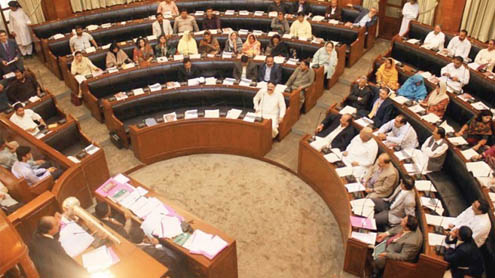 LAHORE / PESHAWAR / KARACHI: Barely 24 hours after the Balochistan Assembly took its last bow, the provincial assemblies of Sindh and Khyber-Pakhtunkhwa were dissolved on Tuesday – with the Punjab Assembly obliged to follow suit on Wednesday (today).

Sindh Governor Dr Ishratul Ebad Khan dissolved the Sindh Assembly Tuesday night on the advice of Chief Minister Syed Qaim Ali Shah.The Pakistan Peoples Party (PPP) and the Muttahida Qaumi Movement (MQM) have had two marathon, brainstorming sessions since Sunday to develop consensus on a caretaker chief minister. The two sides are said to have agreed on the name of Justice (Retd) Zahid Qurban Alvi for the slot.Shah and his former cabinet ministers have flown to Islamabad to convey the decision to the PPP top leadership.

According to sources, the caretaker cabinet would comprise around a dozen ministers. It was not immediately known when the caretaker chief minister would be sworn in, but sources said that the oath-taking ceremony could take place on Thursday.Although the PPP and MQM have developed consensus –other opposition parties say Justice Alvi is unacceptable to them.“Justice Alvi is close to Chief Minister Syed Qaim Ali Shah. How he could be a neutral person? It’s pre-poll rigging and we don’t accept it,” said Nusrat Seher Abbasi of the Pakistan Muslim League-Functional (PML-F).

Arif Mustafa Jatoi of the National Peoples Party also rejected Justice Alvi’s nomination. “The MQM had to consult all opposition parties before proposing a nominee,” he said.Abdul Razzaque Rahimoon of the Pakistan Muslim League-Likeminded also accused Justice Alvi of being partisan. “He had affiliation with the PPP. The interim set-up will call into question the fairness and transparency of the entire election process,” he said.

An official told Media that Hoti had vacated the Chief Minister House a few days ago. He did not return to the Chief Minister House after meeting Premier Raja Pervaiz Ashraf along with his counterparts from other provinces in Islamabad two days ago and instead, went to his hometown in Mardan.The official added that the caretaker chief minister would be sworn in today (Wednesday) around 5:00pm. The Governor House, however, has yet to issue an invitation for the ceremony.

All provincial chief ministers had agreed in a meeting with Premier Ashraf two days ago that the assemblies would be dissolved by March 19.The Pakistan Muslim League-Nawaz (PML-N) has decided in principle to dissolve the Punjab Assembly (PA) on Wednesday (today). The decision was taken at a high-level party huddle at the PML-N Central Secretariat in Model Town. They decided that the dissolution of the provincial assembly would be announced by Chief Minister Shahbaz Sharif at a news conference. He would list the five-year performance of his government and send the advice to dissolve the assembly to Governor Makhdoom Syed Ahmed Mahmud.

PML-N chief Nawaz Sharif will reach Pakistan at 4:00am from Dubai and, according to Chaudhry Nisar Ali Khan, he would consult PML-F leadership in Sindh and nationalist parties in Balochistan before the dissolution of the provincial assembly.The PML-N and PPP are still deadlocked over the issue of caretaker chief minister. The former has proposed Justice (Retd) Amir Raza and former federal secretary Khawaja Zaheer for the slot, while the latter has proposed three names – Asma Jahangir, Mian Amir Mehmood and Hefeez Akhtar Randhawa.

Interestingly, Asma and Mian Amir have already turned down the role of a caretaker.If the deadlock persists after three days of the dissolution of the Punjab Assembly, then the speaker will form a six-member committee – with three members from both the opposition and the government – to decide the matter. If the committee, too, fails to evolve a consensus, the matter will go to the Election Commission. – Tribune