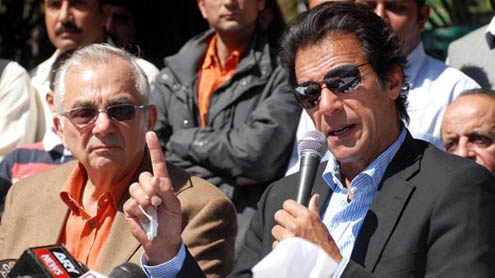 ISLAMABAD: Pakistan Tehreek-e-Insaf (PTI) Chairman Imran Khan on Thursday said the PTI would not award party tickets to bank defaulters, tax evaders and corrupt politicians and it would also move the Supreme Court if the PPP and PML-N jointly got the tax amnesty scheme approved by parliament to protect their tax-evading MPs.

“The PTI will give tickets to those candidates who have a clean past and those who are not involved in tax evasion, burglary and theft, because only a clean leadership can bring a real change in the country which is what the PTI is striving for,” Imran said, adding that the PTI would award tickets to those who uploaded the lists of their assets on the party’s website.

He was addressing a press conference after former bureaucrat Roedad Khan, former ambassador Ashraf Jehangir Qazi, Sikandar Hayat Khan, Hammad Muhammad Khan, Rai Ahsan Raza Kharal, Ahsan Raza Wahga, Khawaja Muddasor Mehmood and Iqbal Khan Qaisrani announced joining the PTI.“Over 70 percent of parliamentarians belonging to the PPP and the PML-N are tax evaders. Both parties have joined hands to get the tax amnesty scheme passed by the standing committee. If they passed the tax amnesty bill in parliament, the PTI will move the Supreme Court against the discriminatory law that is aimed at providing protection to tax thieves,” he said.

He said both the parties had approved the bill to tie the hands of the next government, which by the grace of God would be of the PTI, so that it would not be able to initiate any legal proceeding against the burglars, and tax evaders.Imran said the PTI would respond to the PML-N’s nominees for the slot of caretaker prime minister today (Friday). He said although Justice (r) Nasir Aslam Zahid was respected by all, any decision regarding the caretaker PM would be made in the party meeting.

Talking about the intra-party polls, Imran made it clear that the party would begin the reconciliation process with the objective to address the reservations of all the candidates and if needed, the elections would be held again in certain areas.The PTI chairman expressed apprehension that the Election Commission of Pakistan might only allow those parties which had completed their elections within an hour instead of the PTI which had been going through the process for the past 10 months.To a question about the all-parties conferences (APCs), Imran argued that all the political parties which were now backing the idea of holding talks with the Taliban had made fun of the PTI which was the first one to suggested that talks were the only way out from the crises.The PTI chairman said, “It is beyond my comprehension why have they now convened the APCs… at a time when the government has almost completed its tenure.” He said it seemed that they needed an NOC from the US, which they had got.

Talking about the Iran-Pakistan gas pipeline project, Imran wondered why the government had taken so long to give the go-ahead to the much-needed project.He said both these initiatives were against the US interests, so the present leaders neither had the guts nor the courage to take such a bold step. However, he added that bringing forth such issues at this point in time when the general elections were weeks away seemed political gimmickry.To a query, the PTI chairman said there was no way out of the mess the country was in but holding elections. However, he said the PTI would press the Election Commission of Pakistan to hold free, fair and transparent elections.Welcoming the inclusion of the nine personalities into the party, Imran made it clear that the PTI would not welcome those in the party whose pasts were tainted, as in the case of the rest of the political parties especially the PML-N.

Reiterating his appeal to the Pakistanis in general, and the people of Karachi in particular, he said no one should vote for those who had armed wings in their parties.Talking about the recent surveys in which the PTI was rated below than the PPP and PML-N, Imran said the PTI was busy in the elections within the party which might have affected its popularity, adding that both the PPP and the PML-N had given nothing to the poverty-stricken, inflation-ridden masses other than joblessness, lawlessness, poverty and inflation, so the surveys could not be trusted.The PTI chief said after the March 10 gathering in Peshawar and the subsequent oath-taking ceremony of the newly-elected PTI office bearers on March 23 at Minar-e-Pakistan, all those who consider the two “family-limited parties” more popular than the PTI, would get the answer as to who was more popular. – PT