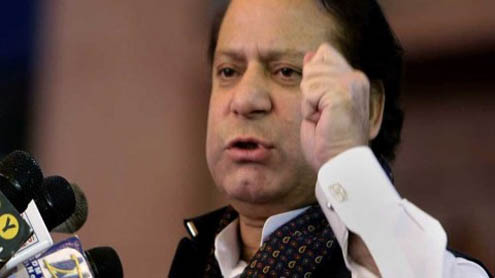 Nawaz said the PML-N manifesto was an all-embracing agenda for national renewal and real change to revive the confidence of people by instilling hope, restoring national dignity and resurrecting Pakistan as a progressive and prosperous nation.Explaining salient features of the manifesto, the PML-N president said a cabinet committee on defence and national security headed by the prime minister would be established to maintain democratic oversight of all aspects of foreign and defence policies, ensuring that all institutions, civil or military, acted in accordance with the law and per directives of the federal cabinet.

“Needs and requirements of the armed forces will be met under all circumstances, and strategic assets will be protected,” he said.He announced that Hazara, South Punjab and Bahawalpur provinces would be created if he came to power.“Our government will eliminate VIP culture and expenses of presidency, prime minister, governors and chief ministers will be significantly reduced. A specially deigned employment programme will be designed to generate three million new jobs in the public and private sectors, including one million each in IT and SME sectors.”“Minimum wages of workers will be gradually enhanced to Rs 15,000 per month,” he added.

Nawaz said the PML-N would strive to eventually provide a house to each Pakistani family through pubic-private partnership.“The PML-N government will revive the economy, double the GDP growth to over six percent, reduce budget deficit to four percent, reduce country’s dependence on foreign loans and assistance, revamp state enterprises eating Rs 400 billion, decrease tax rates, ensure lower interest rates and make Pakistan emerge as one of the top ten economies of the world in 21st century,” he added.

“All major export sectors will be sales-tax free, an Export Import Bank (EXIM) will be set up as well,” the PML-N chief said.Nawaz said the government would improve tax to GDP ratio to 15 percent by 2018, unaccounted economic activity would be brought into tax net and tax evasion would be curbed.“Short and medium-term measures would be initiated to end load shedding in three years, invest $20 billion to generate 10,000MW of electricity in the next five years and permanently eliminate circular debt. High priority will be given to importing gas through pipelines, intensifying oil and gas exploration, developing Thar coalfields by setting up of at least 5,000MW of new coal-fired power plants under the IPP mode in Sindh and developing alternative sources of energy,” he said.

Nawaz added that agriculture would be turned into a fully viable economic industry and high priority would be given to development of livestock and fisheries sectors.“The PML-N government will introduce a transparent system of income support programme for needy families with special focus on widows, orphans and girls.”He said a national Education Emergency would be declared to eradicate illiteracy on war footings and a vision 2025 for Pakistan’s education shall be formulated to transform the country’s education sector into a world class system. The education budget would be enhanced to 4 percent of the GDP by 2018.

The PML-N chief said a new national health insurance card scheme would be introduced for free treatment of children up to 12 years of age, senior citizens of over 65 years and families with low income.He said the government would promote participation of women in national development, enact and improve legislation on violence against women, expand micro credit for female borrowers and inheritance and property rights of female heirs would be safeguarded.

“A dynamic National Youth Policy will be implemented through skill development programme to create one million positions for apprenticeship, self employment loans shall be extended, services of youth will be utilised in national literacy programmes and youth will be involved in governance at local levels.”“A National Day for Minorities will be celebrated, they will have complete freedom of worship, legislative measures will be undertaken to prevent forced conversion of religion, development funds for minorities will be doubled and Christian community will be permitted to run their own educational institutions.”

Nawaz reiterated commitment to the Charter of Democracy and vowed to build strong dimension of democratic governance by building institutions, including an effective parliament, independent judiciary, election commission and a vigilant media.He said Local government elections would be held within six months of general elections and police laws would be reviewed to depoliticise the force and end thana culture.“The PML-N government will grant voting rights to all overseas Pakistanis and dual nationals and the “Aao Badlein Pakistan” programme will be launched to motivate overseas Pakistanis towards development of Pakistan.”

Freedom of media would be guaranteed and respected, Nawaz added.He said the PML-N would form an autonomous national accountability commission, adopt zero tolerance policy towards corruption, ruthlessly stamp out corruption and across the board accountability of all holders of public offices would be ensured.Rejecting militancy and extremism, Nawaz promised to bring FATA and PATA into country’s political mainstream and ensure health, education and other facilities in the areas. – PT