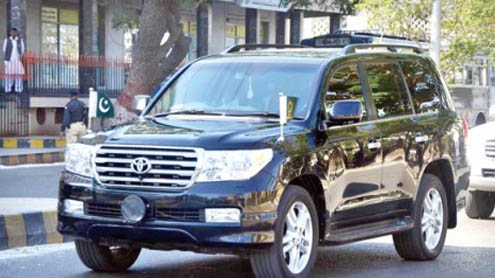 A three-member bench of the apex court headed by Chief Justice Iftikhar Muhammad Chaudhry and comprising Justice Gulzar Ahmed and Justice Sheikh Azmat Saeed was hearing the ISAF missing containers’ case. During the hearing, Justice Gulzar Ahmed also ordered the FBR chief to personally submit a report on the recovery in two weeks’ time.Until now, the FBR has managed to recover only Rs 5.06 million out of the total recoverable Rs 54.73 billion mentioned in a January 19, 2011 report by Federal Tax Ombudsman Dr Shoaib Suddle due to the restrictions imposed by the pending lawsuits.

The total recoverable amount is Rs 54.73 billion, which was accumulated over last four years due to irregularities in collection of custom duties and taxes.During the previous hearing on February 22, the bench had asked the FBR to submit a comprehensive report, including details of the duties and levies recovered.According to FBR’s counsel, those responsible for the losses had obtained a blanket stay order from the Sindh High Court, which restrained the FBR from collecting the recoverable amount.

The court has also directed the chairman to personally appear during the next hearing of the case. During the previous hearing, the court was informed that an amount of Rs 54.73 billion had been defalcated in the ISAF containers’ case and the people involved in looting money had got stay orders from the high court. – PT