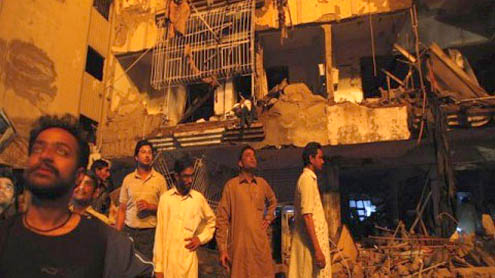 KARACHI: The government of Sindh axed the chief of police in the province on Wednesday over a bomb attack that killed 50 people in Abbas Town of Karachi, following stinging criticism by the Supreme Court chief justice.

Anwer Mansoor Khan, lawyer for Sindh government, told a Supreme Court hearing in Karachi on Wednesday that police chief Fayyaz Leghari was being removed from his post, along with one of his deputies.Leghari was also removed from his post in June 2011, but was later reinstated, after security forces shot dead an unarmed man in a public park. Chief Justice Iftikhar Muhammad Chaudhry slammed the government and security agencies for negligence, demanding to know why heads had not rolled after Sunday’s attack.“We’ll not allow anyone to enjoy public office at the cost of public taxes and do nothing to safeguard their lives and properties,” Chaudhry said.

“Those who died in the blast and others who are continuously being targeted in other terrorist acts are not foreigners. They are our own blood, they pay taxes for our salaries.”Anwer Khan said a number of junior police officials had also been removed from their posts and an inquiry would decide whether any were guilty of negligence.Lawyer for the police, Shah Khawer, told the court that at least 50 people were killed and 139 wounded in Sunday’s blast, which tore through two apartment blocks as worshippers left nearby mosques, trapping people beneath piles of rubble.

The city of 18 million people contributes 42 per cent of country’s GDP but is rife with murder and kidnappings, plagued for years by ethnic, sectarian and political violence, and the CJP warned the situation was getting worse. He ordered the Rangers’ chief to use his 11,000 troops to safeguard the city’s entry points and not allow ‘a single bullet to enter’.Rangers’ chief Rizwan Akhtar said his troops conducted overnight operations and arrested 59 suspects in the blast.

The court ordered the country’s three main intelligence agencies – Inter-Services Intelligence, Military Intelligence and the Intelligence Bureau – to submit reports on Friday on the blast.The court also ordered the suspension of Senior Superintendent of Police Malir Rao Anwar and maintained that all officers, including Inspector General of Sindh Police Fayyaz Leghari, would have resigned from their posts if they had any shame.A three-judge bench headed by Chief Justice Iftikhar Muhammad Chaudhry heard the suo motu case on Wednesday. The other two members of the bench included Justice Ameer Hani Aslam and Justice Aijaz Afzal.

If the government were dissolved earlier during the Karachi unrest case, everything would have been set right by now, Chief Justice Iftikhar remarked while hearing suo motu case on Abbas Town bomb blast. He furthered that the officers of Karachi police travel in armoured cars, which is why they do not feel like protecting the masses.Chief Justice Iftikhar noted that life of a single citizen is more important than that of the officers. He ordered Rangers officials to present a detailed report on miserable law and order situation in Karachi by March 8.The chief justice observed that 10 to 15 citizens die in Karachi each day. The Supreme Court issued orders of suspension of SSP Rao Anwar on immediate basis. The Chief Justice said that everyone including IG should be suspended.Hearing of the case was adjourned till March 8. – Nation