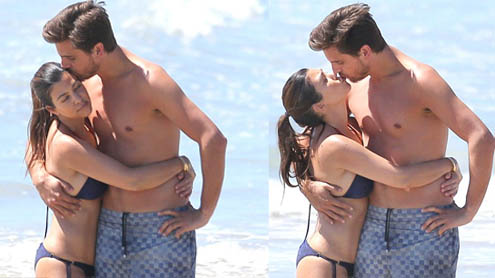 She’s shed 44lbs and slaved away at the gym since the birth of her daughter Penelope just seven months ago.And Kourtney Kardashian’s hard work has not gone unnoticed.

Her besotted boyfriend Scott Disick couldn’t keep his hands off the 33-year-old as she sunned herself in a bikini in Mexico during a family vacation.As their three-year-old son Mason ran around at their feet, the couple shared a lingering embrace in the surf.Kourtney was obviously pleased with the effect her figure was having, swapping between two different swimsuits.She wore one simple black two piece with bead embellishment, and a black and white Agent Provocateur Mazzy bikini, which features a strap around her slim hips.The couple were enjoying some time out together with their two children on the iddylic Mexican coastline.

Staying at their friend Joe Francis’s house, they spent their days pottering around the beach exploring rock pools with an excited Mason and swimming in the warm ocean.With baby Penelope staying inside in the shade, the couple left the sleeping baby with a nanny while they spent time with their son.While his girlfriend was looking her best, Scott had obviously been hard at the gym.The businessman, who at 29 is four years younger than Kourtney, strutted around in a series of swimming trunks.The vacation was the first time they have enjoyed a family vacation since Penelope’s birth.And for once they left their extended family at home.

Sunday night’s episode of Keeping Up With The Kardashians focused on Scott and Kourtney’s relationship.The mother-of-two admitted to putting the children first, to the occasional detriment of her realtionship with Scott.Her nosy sister Kim retorted that it has cut into the couple’s time together – something that could lead to a pretty severe fate.’He just feels like you only care about the kids,’ Kim said. And she warned ‘He’s going to cheat on you and it’ll be your fault.’Kourtney and Scott have been particularly close since the birth of their second child Penelope, but Scott himself opened up to Kim about a growing drift.

‘I feel like she’s a reliable mom and she wants to be around the kids,’ he said, ‘but I wish she was into doing more things with me.’So to prevent him from taking off on a trip to Vegas – where he might be tempted to fall into an unsavoury situation – Kourtney planned a spontaneous trip abroad.’I really do care about my relationship with Scott and I think it’s time that I do something major to show him that I’m not ready to give up.’And she surprised her partner of six years with a trip to the most romantic city in the world – Paris.

But her plans quickly went sour when Scott left her cold and abandoned on the romantic Pont l’Archeveche bridge, throwing her into a fit of tears.The bridge is a high point for loves visiting the city, where they seal their devotion by signing promissory lockets and forever attaching them to the bridge.’I am so upset that Scott didn’t know up at the bridge that he didn’t take me seriously and would stand me up like this,’ she divulged. Luckily Scott saw her tears and managed to repair the damage with a day’s sightseeing from the river – ending at the bridge.And it seems that the pair have learnt their lesson, prioritising their time together with their recent trip to Mexico. – DailyMail