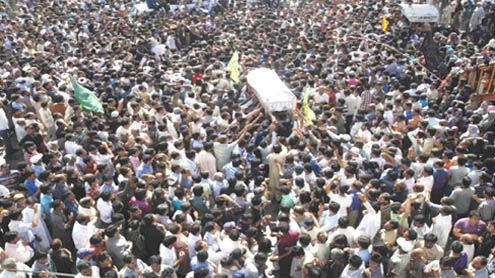 KARACHI: At least two people were killed while 22 others were injured during firing incidents across the port city on Monday as a large number of people, crying and sobbing, attended the funerals for at least 16 victims of the Abbas Town blast.

Commercial and civic activities remained halted across the tense city where a strike call had been given by different religious and political organisations. Mostly protesters were on streets and firing incidents were reported in many parts of the Sindh capital.Firing between Shia mourners and a rival sectarian group lasted for several hours in Sohrab Goth resulting in the death of two people and injuries to several others. At least three vehicles were also set ablaze by angry mobs.

Several people were injured during firing in Abbas Town, while rescue teams deployed in the area were also targeted. Across the city, 22 people including Rangers personnel were injured in firing incidents. Firing was also reported from Ancholi and Indus Plaza.The worsening situation forced the government to finally announce a crackdown against banned sectarian and terrorist outfits, besides imposing ban on pillion riding from Monday midnight. The provincial government also announced Rs5 million award money on information about the culprits of Abbas Town carnage.

Over 50 people were killed and more than 150 others injured in Sunday’s bombing in Abbas Town. The bomb exploded as worshippers came out of mosques, ripping through two apartment blocks, setting one of them on fire and trapping people beneath piles of rubble. Survivors are being housed temporarily in schools.The police officials said 150 kilograms of explosive material was used in the blast. There has been no claim of responsibility, but the major suspects banned Sunni extremist Lashkar-e-Jhangvi, which killed over 200 Hazara Shiaz in Quetta, and the Taliban.

Thousands of mourners, including women and children, many of them wearing black bands around their heads, beat their chests and heads and sobbed as eight coffins passed by at the start of the first funeral on Monday. At least 4,000 people turned out for the funerals, police officers estimated.Traffic was thin as educational institutions, businesses and markets closed after the local government announced one-day mourning and Shia groups three days of mourning. A complete strike was observed on the call of Majlis Wahdat-e-Muslimeen (MWM), a conglomerate of various Shia organisations against. The strike call was supported by various political and religious parties including Jammat-e-Islami, Jamiat Ulema Islam, MQM, PML-N, Jamiat Ulema-e-Pakistan and Sunni Tehrik.

Strike against Sunday’s blast was also observed in other cities and towns of Sindh. Several protest demonstrations were held in Hyderabad, Sukkur, Nawabshah, Larkana, Shikarpur, Khairpur, Thatta, Sanghar, Jaccobabad and other parts of Sindh. Addressing the demonstrations, the MWM leaders warned that their party’s policy of peace should not be considered weakness. If the killers of Shias were not arrested, the public might take some extreme steps to force the government for that, they said.Federal Interior Minister Rehman Malik and Sindh Chief Minister Qaim Ali Shah jointly chaired a high level meeting at CM Secretariat on Monday where they decided to launch an indiscriminate and comprehensive crackdown against terrorists and anti-state elements in Karachi. Another important decision was eliminating of illegal occupations by land grabbers across the city.

The meeting decided to start operation against banned sectarian outfits operating in fake names and strictly monitor their hideouts. The meeting decided there will be prompt vigilance on activities of such elements at entry points on inter-provincial borders. It was agreed that soon a meeting will be held with the administrators of Wifaq-ul-Madaris to apprehend wanted persons of different banned organisations. It was informed that there are 1,716 seminaries working under the Wifaq-ul-Madaris where more than 20,000 students are being imparted religious education.

The Sindh government had constituted a six-member committee charged with investigating Sunday’s blasts. The committee, comprising police and Rangers officers, will file its report in three days to the chief minister. The meeting appreciated the efforts of investigating team working under CID Police AIG Ghulam Shabbir Shaikh and security measures adopted by DG Rangers and Sindh IGP. – Nation

PTI to submit details of intra-party polls by Mar 15