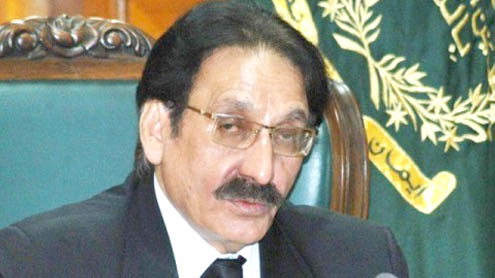 ISLAMABAD: After initiating proceedings in the matter related to massacre of Hazara community, Chief Justice Iftikhar Muhammad Chaudhry took suo moto notice over the recent bomb blast on Shia community in Karachi in which at least 45 people lost their lives and 150 were injured.

The case was fixed for hearing tomorrow (Wednesday) in Karachi. The court issued notices to Sindh Advocate General Abdul Fateh Malik and Inspector General of Police Fayyaz Ahmed Leghari to submit a detailed report over the deadly bombing.The chief justice noted that the government had failed to protect lives and property of citizens, so an appropriate order, after hearing all concerned, was required to be passed.

The CJP took notice of the incident on a note initiated by the SC registrar, based on press clippings of different newspapers containing the details of the blast in which over 50 people died and 150 were injuredin Abbas Town in Karachi.After the explosion, the members of the Shia-community took to the streets against the law-enforcement agencies and the government, demanding arrest of killers. The mourners gathered at different places and burnt a bus on MA Jinnah Road. The situation in many areas remained tense.

It was further reported that the law-enforcement agencies and other government officials did not reach the venue of the blast in time for a rescue operation, due to their presence in a private function to provide security/protocol to high-ups.The note of the SC registrar further stated that following the pattern of two consecutive bomb blasts in Quetta, this equally shocking carnage should serve as an eye-opener. The incidents in Quetta led to the sacking of the provincial government, with calls for replacement of civil administration with the armed forces. – Nation

PML-N’s popularity up by 9pc

PML-N’s popularity up by 9pc