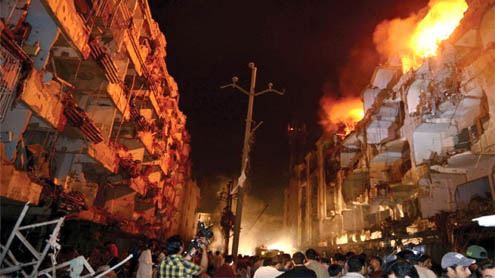 KARACHI: A powerful blast ripped though Abbas Town in Karachi on Sunday evening, leaving 45 people dead and over 150 injured.

The residents of the area are no strangers to violence – last year during Muharram, a powerful explosion rocked the area, killing three people. Six years prior to this, the residents of the area witnessed a suicide bombing which claimed the life of the chief of Tehreek-e-Jafria Pakistan, Allama Hassan Turabi.The latest explosion took place in a street lined with apartment buildings and myriad small shops on both sides. The bomb went off right outside Iqra City and Rabia Flower apartments, both of which are four-storey buildings with small stores on the ground floor. So powerful was the explosion that the façade of the buildings on both sides of the street crumbled, burying everything below.

In addition to this, television sets, chairs, fans, grilles and an assortment of household objects started raining down on the street. The explosion also created a 10-foot wide and four-foot deep crater in the road.Sindh Inspector General of Police (IG) Fayyaz Ahmed Leghari said that the blast was so intense that it had an impact radius of about 700 metres. “About 200 flats have been affected by the explosion,” he said. Many of them were engulfed by flames seconds after the explosion and as many as 50 flats were destroyed by the time the blaze was put out.

Since Imam bargah Mustafa is situated close to the blast site, many residents began suspecting that the explosion was meant to target the men who had left their homes to offer Maghrib prayers.“Why are we being targeted because of our beliefs?” wailed Fatima, one of the residents of the area, as she stood on a pile of rubble. “Our only sin, our only fault, seems to be that we belong to a different sect.”Eyewitnesses say that they heard two blasts, not one. Amjad Ali, who was travelling along the street towards Abul Hasan Ispahani Road, said that he had nearly reached the end of the street when he heard two blasts in quick succession. “I thought that it was a suicide bombing. When I was passing through the area, I didn’t see any motorcycle or car standing on the road.”

It took some time for the fire tenders to arrive at the blast site, and even when the firefighters arrived, it was difficult for them to douse the stubborn flames as the street was narrow and not more than one vehicle from the fire brigade could enter it. Making matters worse was the debris that was obstructing the road. Once they got there, they began evacuating the residents of the buildings and declared the structures unsafe.

The bodies, most of which were charred, were taken to the Liaquat National Hospital, Patel Hospital, Abbasi Shaheed Hospital and Jinnah Postgraduate Medical Centre. Among those who lost their lives in the incident were the sister, brother-in-law and nephew of Sindh Assembly’s deputy speaker, Shehla Raza. A Muttahida Qaumi Movement (MQM) activist, Amir Zaidi was also killed.

Though the intensity of the blast was quite severe, no high-ranking official from law enforcement agencies had visited the site. In fact, up to two hours after the blast, law enforcers were conspicuous by their absence. A majority of the city’s law enforcers were deployed at Mohatta Palace at the other end of town, where Sharmila Farooqi’s engagement ceremony was taking place.

“Are the law enforcers and the government sleeping?” cried Razia Khatoon, a resident of one of the buildings licked by flames. “It seems as if all of our leaders have vanished into thin air.”Another man, Abbas Ali, who had come to the area from Ancholi, was livid with rage at the government, though for different reasons. “The government is negotiating with the Taliban even though militant groups are wreaking havoc on the city. What kind of justice is this?”

Once the top brass got around to investigating the blast, some progress was made. Crime Investigation Department SSP Fayaz Khan said that the engine of a car which might have been used in the attack was found. “We are now deciding whether a suicide bomber was also involved. About 150 kilogrammes of explosive materials with ball bearings have been used in the blast.”

The SSP claimed police had information regarding the attack beforehand. According to them, Lashkar-e-Jhangvi might be involved in the incident.Sindh Governor Ishratul Ebad has also constituted an investigation team, headed by IG Fayyaz Leghari, to probe the incident. According to Leghari, one suspect has already been detained in connection with the blast.

The MQM has announced a day of mourning over the incident. Several Shia organisations, including the Majlis-e-Wahdat-e-Muslimeen , Shia Ulema Council and the Tehreek-e-Jafria Pakistan have also announced three days of mourning. The Sindh chief minister has announced that schools around the province will remain closed. The flag will fly at half mast. – Tribune