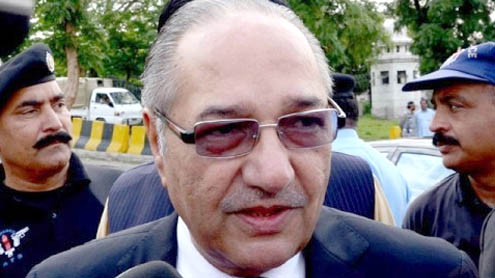 ISLAMABAD: PPP Minister for Water and Power Chaudhry Ahmed Mukhtar on Friday informed the national assembly about the pros and cons of the Kalabagh Dam, bringing to light the huge benefits this national project could bring to the water and energy starved nation.

In response to a question from PML-N’s Sheikh Rohail Asghar, the PPP minister told in his written reply that the Kalabagh Dam (KBD) would yield direct annual benefit of about Rs60 billion from irrigation supplies, power generation and flood alleviation. Average benefits of additional irrigation supplies of the project are estimated at Rs12.50billion per annum, he added.

Additionally, indirect benefits like more industrial and food production, employment and agricultural boosts will accrue, he said. The minister maintained that the dam would augment about 6.1MAF of irrigation water supply annually. The additional water will be made available mostly during Rabi season from October to March and for sowing of Kharif crops like cotton, sugarcane and rice during April and May.

The dam will generate an average of 11,400million KWh annually. Through conjunction, Ahmed Mukhtar said the KBD will enable Tarbela Dam to generate an additional 336 million Kwh of electricity and its average benefits are estimated as Rs46 billion per annum. He said that KBD will add 3,600MW electricity to the system. This will improve the hydel to thermal ratio. About 11.4billion units of low cost hydel electricity will be produced annually and transmitted on the national grid for supply to all provinces. This addition of cheaper power will help stabilise the tariff, benefitting the entire nation.

As regards the flood alleviation, the PPP minister said that Kalabagh Dam will reduce the frequency and severity of flood damage in downstream areas, the alleviation being particularly significant over300 River Miles between the dam and the Indus Pajnad confluence. Kalabagh reservoir will be drawn down at the start of the monsoon flood season and will not be refilled until late in the season. “Some floods will be absorbed by the reservoir and average flood control benefits are estimated as Rs1.50 per annum.”

While sharing the expected loss, he said the Kalabagh reservoirs will extend 92 miles up the Indus river from the dam site and 36 miles up the Soan river, and about 10 miles up the Kabul river from the Kabul-Indus influence. As per the Survey of Pakistan Datun, the reservoir area would be 164 sq miles. Total cultivable affected land under the reservoir is 35,000 acres and cultivable land to be submerged under the reservoir elevation of 915 feet and acquired permanently would be 27,500 acres (24,500 acres in Punjab 3000 acres in KPK), he added. The remaining 7,500 acres is the land that will be temporarily submerged by floods with reservoir level of 1 in five years.

About population dislocation, he said based on 1998 estimate, total population to be relocated is 108,101 of which 56,929 shall be from Punjab and 42172 from KPK.Later, the main opposition parties in the national assembly, the PML-N and the MQM at the fag-end of the session staged a walkout in protest against the latest increase in petroleum prices.

“This recent increase in petroleum products’ prices is unfair. Incumbent government should also (have taken steps to) increase income of masses,” said Pervaiz Malik from PML-N, before staging the walkout. MQM MNA Asif Hasnain also termed the increase of petroleum prices unjust. “Ogra has increased the prices as per their own decision which is not fair at all,” he said. – Nation