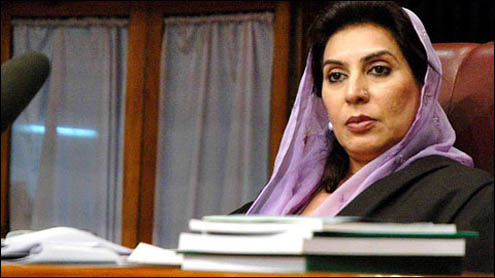 ISLAMABAD: Speaker Fehmida Mirza, who has been chairing National Assembly proceedings only sparingly after her recent illness, rushed to the house on Wednesday to calm down tempers after a Pakistan People’s Party (PPP) defector turned on the ruling party for alleged plans to rig the coming elections in Sindh province.

Syed Zafar Ali Shah, a veteran parliamentarian, amply proved he would not let his recent switchover to the opposition Pakistan Muslim League-N (PML-N) pass off quietly but would remain a thorn in the side of his old party by keeping his parliamentary seat for the remainder of the house’s life until mid-March, even if he is accused of being unethical.The speaker said she “heard some noise” so she came to the house from her chambers as she took the chair from a senior PPP member, Chaudhry Abdul Ghafoor, who was then presiding over the sitting and facing an uproar caused by Mr Shah’s tirade.

And her appeal to lawmakers to be “positive” and avoid any negative talk during the remaining two weeks of the present and the last session of the house doused the fireworks and was met with a reassuring speech from a senior PML-N member, Saad Rafiq, in support of smooth proceedings though he said “heat of speech” was part of parliamentary practice.The speaker also told the house that during the last week of the present session, which is due to end on March 12, would be celebrated by playing the national anthem before the start of each day’s sitting.

It was the second time this week that Mr Shah, who announced his switchover to the PML-N on Feb 8, confronted the party he said he had joined in the late 1970s while sitting on the same party’s seat, provoking protests and chants of “lota” (turncoat) from PPP benches and a demand that he quit the assembly for violating constitutional provisions against floor-crossing.

In his speech on a point of order, he formally acknowledged he had “said goodbye to his party”. But he did not seem inclined to follow politicians like former foreign minister Shah Mehmood Qureshi and Javed Hashmi who themselves vacated their PPP and PML-N seats respectively in the National Assembly on ethical grounds after joining the Pakistan Tehrik-i-Insaaf last year, apparently hoping the PPP would not prefer a lengthy procedure to get him disqualified though the Election Commission while the assembly has only 17 days left to run out its five-year term. – Dawn