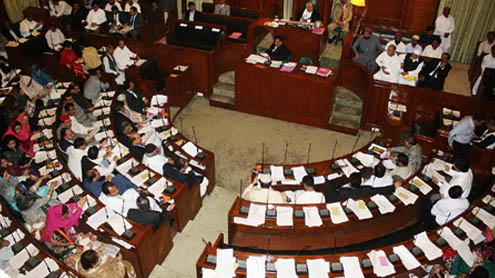 KARACHI: The Sindh Assembly on Wednesday passed five government bills and a resolution, moved by a lawmaker of Mutahidda Qaumi Movement (MQM), for establishment of a private university in Hyderabad.

PPP leader and Sindh Minister for Information, Sharjeel Inam Memon said that passage of the 18th Constitutional amendment was not aimed at handing over all matters to the syndicates. PPP’s Rafiq Engineer said that he lived in Karachi and he had experienced the decisions of syndicates. He added that it was the reason that they had no confidence on syndicates of the universities functioning in Karachi. PML-F’s Syeda Marvi Rashdi said the MQM’s amendment was uncalled-for as powers pertaining to the admission policy should remain with the government.

The house also unanimously passed a resolution condemning the recent blast in Jacobabad moved by PPP’s Imran Zafar Leghari. In the resolution they also condemned PML-N for its alleged support to banned extremist organisations.MQM’s members chanted slogans ‘shame, shame’ when Deputy Speaker Shehla Raza announced the Governor’s assent to the bill passed by the Assembly regarding withdrawal of Sindh People’s Local Government Act, 2012, and restoration of Local Government System, 1979 in Sindh.

National People’s Party MPA Arif Mustafa Jatoi moved two separate adjournment motions about the commission’s report on establishment of Southern Punjab Province, and adjournment of Sindh Assembly session by the Deputy Speaker Shehla Raza on February 25, Monday. Dr Sikandar Mandhro, who was presiding over the proceedings at the moment, rejected both the motions by declaring them against the rules.

Earlier some 30 members of the MQM submitted another application at the Assembly secretariat nominating Aamir Moin Pirzada as opposition leader. Earlier the party had nominated Syed Sardar Ahmed for the office but fresh nomination was submitted due to delay in acceptance of resignation of Syed Sardar Ahmed as a minister. Deputy speaker assured them to allot opposition seats and appoint Aamir Moin as opposition leader shortly.

Boycott: Journalists covering the assembly proceedings staged a walkout in protest against what they described as a mysterious death of local senior journalist, Khushnood Shaikh, who died in a road accident couple of days back. Sharjeel Memon visited the journalists’ gallery and assured them the government would order an inquiry into his death and would seek report within three days. – DailyTimes