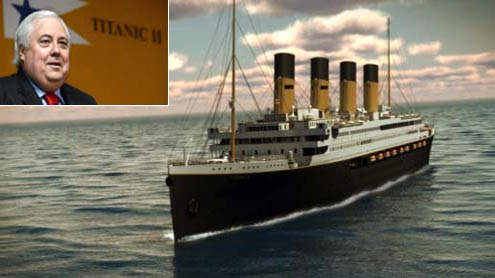 An Australian billionaire is getting ready to build a new version of the Titanic that could set sail in late 2016.

Clive Palmer unveiled blueprints for the famously doomed ship’s namesake Tuesday at the Intrepid Sea, Air and Space Museum in New York. He said construction is scheduled to start soon in China.Palmer said 40,000 people have expressed interest in tickets for the maiden voyage, taking the original course from Southampton, England, to New York. He said people are inspired by his quest to replicate one of the most famous vessels in history.

‘We all live on this planet, we all breathe the same air and, of course, the Titanic is about the things we’ve got in common,’ he said. ‘It links three continents.’The original Titanic was the world’s largest and most luxurious ocean liner when it hit an iceberg in the North Atlantic and sank on April 15, 1912. Only 700 people of the more than 2,200 on board survived the most famous maritime disaster in history, partly because there were not enough lifeboats to carry everyone.

Palmer said an unknown when the original ship sailed — climate change — may play into a positive for the new ship’s fate.‘One of the benefits of global warming is there hasn’t been as many icebergs in the North Atlantic these days,’ Palmer said.Passengers on board the replica will dress in the fashion of that period and eat dishes from the original menu, in dining rooms copied from the ill-fated predecessor.

Joining Palmer on Tuesday was Helen Benziger, the great granddaughter of Titanic survivor Margaret ‘Molly’ Brown. Benziger, who agreed to serve on the advisory board for the Titanic II, said her great grandmother, who died in 1932, would have loved to see the Titanic rebuilt and complete the journey it never got to finish.In what some may consider a temptation of fate for a remake of a notoriously ‘unsinkable’ ship that sank, a representative of the Finnish designer of the Titanic II said it will be the ‘safest cruise ship in the world.’

Markku Kanerva, director of sales for marine design company Deltamarin said that while the vessel is modeled after the legendary liner — the diesel-powered ship will even have four decorative smoke stacks mimicking the coal-powered originals — it will meet modern navigation and safety requirements.In addition, plans call for a new ‘safety deck’ featuring state-of-the-art lifeboats, safety chutes and slides. The new ship will also have amenities unknown a century ago, like air conditioning.

Palmer, who is funding construction of the ship himself, built his fortune in real estate and coal. Australia’s BRW magazine estimated his net worth last year at $4 billion, although Forbes puts it at $895 million.‘I want to spend the money I’ve got before I die,’ he said. ‘You might as well spend it, not leave it to the kids to spend, there will be enough left for them anyway.’ – KahleejNews