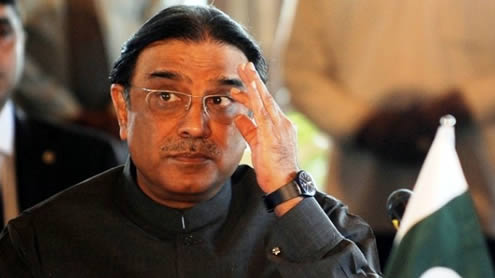 ISLAMABAD: A meeting was held here at the Aiwan-e-Sadr Tuesday with President Asif Ali Zardari in the chair to review power situation in the country.

The meeting was attended by Minister for Water and Power Ch Ahmad Mukhtar, Minister for Finance Saleem H. Mandviwala, Advisor to Prime Minister on Petroleum Dr Asim Hussain and senior officials of the ministries concerned.

Spokesperson to the President Senator Farhatullah Babar said that the President was briefed about the causes of power outage Sunday night and the steps being taken to avoid any such situation in the future.

The President was informed that the power failure resulting from atechnical fault had been rectified and on the directives of the Prime Minister an inquiry committee had been constituted with Member (Power) WAPDA as its convener to ascertain the reasons and to fix the responsibility for the failure.

The Minister for Water & Power briefed the President about the current demand and supply of power. Dr Asim Hussain briefed the meeting about the availability of fuel and gas for electricity generation.

The progress made so far on various ongoing projects in the energy sector with special reference to finances involved in their completion was also discussed. – Brecorder