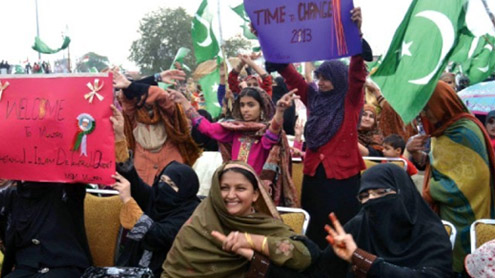 MULTAN: “My final contest will be on March 17 in Rawalpindi’s Liaqat Bagh.I will then tell the nation whether to vote in an election or pursue a revolution,” Awami Tehreek president and chairman of the Minhajul Quran International Tahirul Qadri said on Friday.

He was addressing a gathering in Multan. Qadri presented what he called a 10-point national agenda “for progress and prosperity” of the people of Pakistan.The agenda seeks devolution of all subjects to the provinces, making 15 to 20 new provinces- each with two administrative divisions. It calls for an end to feudal politics, inheriting political office, feudalism, capitalism and centralisation of powers.

Despite the heavy rain, Qadri stuck to his plan to address a gathering of more than 20,000 at the sports ground. More than 900 party and organisation workers, including some 300 women, had been making arrangements for the event over the last two days.Qadri started references to the Holy Quran and recalled several events in the lives of the prophets and saints. He said that Pakistan was not created for the ruling elite, but for the deprived. Today, he said, he had the same vision as of Muhammad Ali Jinnah and Allama Iqbal.

He said in Pakistan, whoever talked about the rights of the poor was declared an alien. And yet, he said, those with properties worth billions of rupees abroad called themselves Pakistani nationals and leaders.“How are elections justified in a country where people are not provided with equal opportunities,” he asked. He said political power was being treated as an inheritance among the rich and the powerful.This, he said, was a trend set by corrupt politicians in Pakistan. A poor man, he said, could not even think of contesting an election.He said the people of Pakistan were forced to pay extortionists just to be left alone.

This, he said, was not the Pakistan Quaid-i-Azam had wanted.He said foreigners were not a threat to the country. Today, he said, the biggest threat to Pakistan was its leading politicians.Talking about his party’s strategy, Qadri said he would only contest the elections if this could lead to end of corruption in Pakistan.“I tried to teach [them] a lesson in the Constitution by reading its Articles 62 and 63, but it seems that no one is interested. I reiterate that the Election Commission is unconstitutional and must be dissolved,” he said.Qadri thanked his supporters for showing up in the rain and urged them to stick to their demands.More than 700 policemen were deployed at the sports stadium. – Tribune