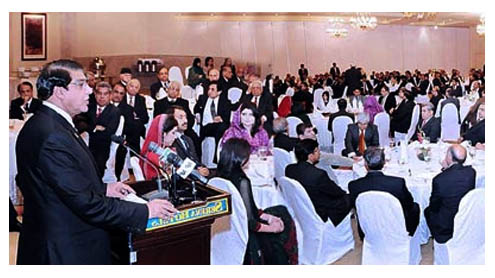 ISLAMABAD: Prime Minister Raja Pervez Ashraf on Thursday called upon officers of civil services to make necessary adjustments in their role and orientation to respond to growing needs of people.

Speaking at the annual dinner of Pakistan Administrative Service Association here, he said bureaucracy cannot remain aloof from the dynamics that influence society.“Old tools of public sector management have become irrelevant.  We are passing through extraordinary times. This requires extraordinary responses. You need to think out of box to find solution to the problems of the people.”He said the relationship between civil bureaucracy and politicians has always been a subject of intense debate.“I believe that government servants should not work for the government but with the government.”

“We have an independent judiciary, free media, sovereign Parliament and above all a consensus on the need for sustainability of a democratic system. This augurs well for the future of this country.”He said the government initiated far-reaching reforms but this will take time to bear fruit. “What we need now is continuity of policies.  The role of civil services in translating these reforms into dividends for people is critical.”
He said civil services are the backbone of any state.

“You are the face of the government. When you deal with people, they pass a verdict on the success or failure of the government based on quality and nature of your decisions.”“You must understand that your actions are subject to greater public scrutiny now than ever before. Your role is that of a facilitator, a catalyst, an enabler and a provider of services to the people.”In an age of specialization, public servants are expected to develop expertise in their respective areas, the Prime Minister said adding the government is ready to allocate additional resources for capacity building and training.

“Let me remind you that your performance and output is being constantly judged by way of comparison and contrast with the private sector as well as other services.”    “We are cognizant that government servants were underpaid and their perks and privileges were not compatible to their status.”In the past five years, the Government has endeavoured to improve working conditions of government servants and their personal well-being. Issues relating to their promotion, transfer, posting and streamlining of their careers have been addressed and timely promotions have been made to boost their morale and motivation, he noted.

He directed the Establishment Division to ensure that the Supreme Court’s decision on promotion, transfer and postings is implemented in letter and spirit to ensure security of service and tenure.The Prime Minister said government and people of Pakistan have certain concerns about civil services.Perceptions against bureaucracy vary from being arrogant, nostalgic, snobbish, insensitive and lack of propriety and the present system of performance evaluation of officers needs to address these aspects.“I am afraid that granting outstanding reports may earn goodwill or encourage group feeling but would surely damage the service in the long run.”

“At the middle management level, project management is very poor. We need to have hard look on this critical aspect. If a project is not completed on time, it loses its utility apart from cost over-runs. This is unacceptable. National School of Public Policy should introduce a course on project management to enhance their expertise in planning and execution of projects. It is my advice that an officer should only be considered for promotion to Grade-20 after he clears the said course.”He said he is not convinced by arguments that performance and efficiency would improve by giving more authority to government servants.

“Those who want to deliver and perform have enough space to do so. What is required is that the government servants come out of their inertia and think ‘out of box’. This does not necessarily mean disregarding the laid-down rules and procedures.”He said media has become a force to reckon with and the officers should develop capacity and aptitude to handle media.“Inter and intra-group rivalries are detrimental to the fabric of civil service and public interest. These only undermine bureaucracy’s capacity to deliver. The government departments and servants have become islands unto themselves. There is a need to increase inter-departmental coordination.”

He urged that the Secretaries’ Committee should be made more robust to serve as institutional liaison between bureaucracy and the government.All proposals regarding improvement in service structure and delivery should be routed through this Committee, he added.The Prime Minister said Pakistan has a proud legacy of able and competent civil servants.“My government is doing all in its power to maintain their dignity, independence and prestige. That the civil service attracts the best among the youth is a measure of the status it enjoys in the society,” he added. – APP