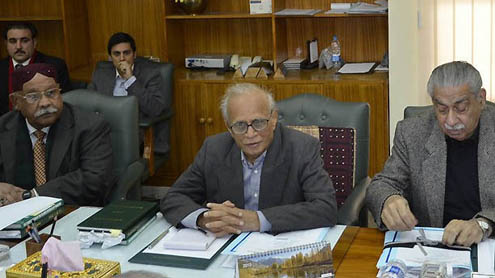 ISLAMABAD: With an aim to stop corrupt and tax evading politicians from taking part in elections, the Election Commission of Pakistan (ECP), in collaboration with the State Bank, Federal Board of Revenue (FBR), National Accountability Bureau (NAB) and the National Database and Registration Authority (NADRA), has evolved a mechanism for electronic/online scrutiny of the nomination papers.

In a meeting held on Wednesday with Chief Election Commissioner (CEC) Fakhruddin G Ebrahim in the chair, it was agreed that a committee under the supervision of the director general of (DG) elections and including officials of the partner institutions, would assist the returning officers in the scrutiny of candidates.The meeting was also attended by State Bank Governor Yaseen Anwar, FBR Chairman Ali Arshad Hakeem and NADRA Chairman Tariq Malik.

The FBR chairman told the meeting that the FBR would provide the detailed list of all tax defaulters to the ECP within the required time. Whereas, NAB’s representative assured the commission that the watchdog would provide records of convicted politicians and those who had singed a plea bargain.

Per mechanism, the commission, after receiving nomination papers, will crosscheck the details of candidates’ tax returns, assets, corruption cases, details of foreign trips, family record, and details of their offspring pursing education abroad. After getting a complete picture of the candidates, the ECP would make public all the information by putting candidates’ nomination papers on its official website. The ECP wants the general public to know the credentials of the contesting candidates.

This development may hit many sitting members of the parliament (MPs), as reportedly over 70 percent sitting MPs are tax evaders and most of them do not even have their income tax number. Fifty-six lawmakers were sent home by the Supreme Court for submitting fake degrees with their nomination papers in the last general elections, and once again they are flexing muscles to contest the upcoming elections.

“In the upcoming general elections, we will implement Articles 62 and 63 of the constitution in true letter and spirit. We will not allow fake degree holders, tax evaders and loan defaulters to become members of the parliament,” said ECP Secretary Ishtiak Ahmed Khan while speaking to reporters. He said that in order to conduct credible elections, Articles 62 and 63 of the constitution envisage that each candidate must fulfil the requirements of these articles.

To a query, the secretary said that the time period given in the constitution for the scrutiny of nomination papers could only be changed through a constitutional amendment, adding that it was the responsibility of the parliament to make the amendment.During the meeting, the CEC said that the cooperation of all departments was required so as to scrutinise the particulars of prospective candidates, as to whether they fulfil the criteria mentioned in Articles 62 and 63 of the constitution to become true representatives of the people or otherwise.

State Bank Governor Yaseen Anwar endorsed the CEC’s view point and said that the SBP would fully cooperate with the ECP. The FBR chairman said that they could provide the detailed list of all tax defaulters to the ECP within the required time. In the meeting, it was also decided that officers of the FBR would sit at the ECP and scrutinise the nomination forms, and then send the same to returning officers concerned for rejection/acceptance of the nomination papers. It was also agreed that the FBR would make a sub-committee to work out the potential tax payers and provide that information to the ECP. – PT