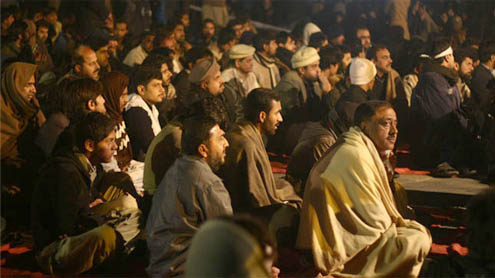 Lahore: The metropolis came to a complete halt due to the sit-in at The Mall Road that is being staged by members of the Shia community in protest of the killings of Hazara Shias in Quetta.

The Mall Road serves as a bridge between different parts of the city. Traffic coming from Cantonment, Gulberg, Fasial Town, Johar Town and Defence came to a standstill while that coming from Mozang also could not pass.Many cars were running out of fuel, making the waiting commuters aggressive and angry.Taking to Pakistan Today a commuter, Asif Hassan, said “All adjacent roads were packed and I have been stuck here for the past three hours.”

“I have to rush to Services Hospital but I am stuck here because there is no way out,” a Rescue 1122 driver on The Mall said, adding that he did not know how long it would take for him to get out of the jam.“The protesters should maintain discipline no matter what their demands are. We too are citizens like them and if the government has failed to give protection to them, they should make the the government suffer, not us,” another commuter said.

“I am only standing here and watching what is going on. There is no way for me to control this traffic till The Mall Road doesn’t clear up,” a traffic warden said.“The protesters are not cooperating with us and the main cause of the traffic jam is the sit-in on The Mall Road. There is nothing we can do if people don’t listen to us,” Chief Traffic Officer Captain Sohail said. – PT