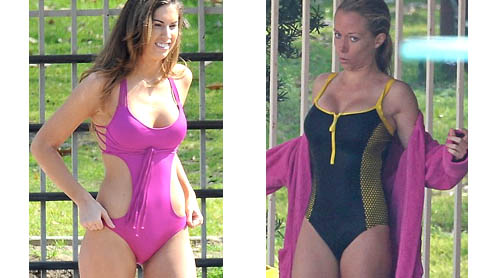 After signing up for celebrity diving TV show Splash, both stars were certainly aware they would be flashing a fair bit of their enviable figures in a variety of bathing suits and diving attire.

And famous participants Katherine Webb and Kendra Wilkinson were confidently showing off their curvaceous figures during practice for the show on Monday.It was very much a case of battle of the bathing suit babes as the stars flashed the flesh in revealing swimming costumes. Former Miss Alabama Katherine had the edge in the sexy stakes in her purple low cut monokini which featured side cut out panels and purple lacing.Kendra’s black and gold suit showed off her famous Playboy curves but was a little more modest in comparison to her rival.

The smiling Katherine seemed to be in good spirits as she showed off her new diving prowess by the pool.She left her brown hair loose around her shoulders, while Kendra tied her blonde locks up in her usual ponytail.The blonde bombshell later changed to practice in a blue and black wet suit.The former girlfriend of Hugh Hefner has been hard at work on ABC’s upcoming diving series, Splash, in which 10 celebrities leap 10 metres into the pool.New celebrity Katherine recently spoke about why she signed up to the show.

‘I thought it would be such a fun idea, crazy, to learn how to dive from a high dive,’ she told Access Hollywood, although admits her training didn’t initially go too smoothly.’I think I face planted the other day,’ she laughed. ‘I was trying to flip off the dive and I ended up face planting and I come out of the water and I’m stinging all over. But hopefully nothing like that will ever happen again, so we’ll see.’ Meanwhile, Kendra looked a little calmer on Monday than her display last week when she appeared to be screaming and shouting at her personal diving trainer Greg Louganis.

The beautiful blonde was irate and furious over something and clearly wanted to make her point clear.However, Greg remained calm and never lost his cool as Kendra let rip.The gold medal winning Olympian simply sat back and took the tirade in his stride as an animated Kendra threw her arms out and gestured angrily.Kendra, who has admitted to being afraid of heights, has said that training for the show has encouraged her to get her son Hank Jr. into a swimming pool.

The former playmate said: ‘It’s really inspired me to get [Hank Jr.] to go out and learn how to swim and jump in the pool, so that’s what we’re going to start doing now too!’Kendra and Katherine join fellow contestants former NBA player Kareem Abdul-Jabbar, Louie Anderson, Nicole Eggert, and actress Keshia Knight Pulliam on the reality show premiering March 19.In fact, celebrities Nicole and Keshia joined Kendra for a chat at one point in the day with their legs dangling in the water while actor Drake Bell stood by in a blue robe.