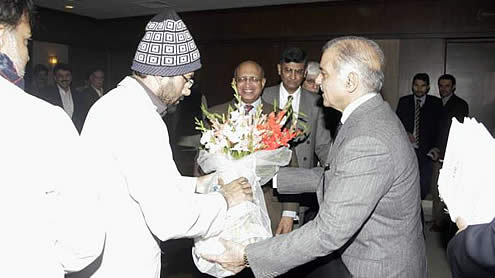 LAHORE: Members of the Young Doctors’ Association (YDA) on Sunday announced to call off their hunger strike after meeting with Punjab Chief Minister Shahbaz Sharif in Model Town.

The members of the delegation also assured the chief minister of not going on strike again, as well as apologised for their past conduct. Welcoming the announcement of doctors of ending their strike, the CM described it as a good omen for the health sector and said that going on strike did not behove doctors, as they belonged to a noble profession and could earn success in this world and the world hereafter by serving the ailing humanity.

Talking to the delegation, Shahbaz said, “Doctors are associated with a sacred profession and have deep respect in society as they are considered messiah of humanity.” He said that the word of strike should not be in the dictionary of doctors, and they should earn the blessings of the people by serving the ailing humanity. He said that the promises made by the Punjab government for the welfare of doctors would be honoured.

He said that the target of the government as well as the medical community was to improve the system of health, and both of them would have to move together towards this end. He said that he would fully support the doctors in the development of the health sector. The chief minister also constituted a committee, headed by Senator Pervaiz Rasheed and consisting of representatives of doctors and the government, on the occasion. He said that the committee would consider issues like free provision of medicines in the hospitals, repair of machinery, improvement of healthcare system and solution to problems of the doctors, and submit its recommendations on February 25.

He said that the government was committed to serving humanity and had spent billions of rupees on the provision of treatment facilities to the people during the last four-and-a-half years. He said that an additional burden of Rs 9 billion was being borne by the government due to the increase in the salaries of doctors, paramedics and nurses. He said that the raise given by the Punjab government in the salaries of doctors was unprecedented, and despite this, the highest rate of strikes of doctors in Punjab was incomprehensible. He said that the present government had revived the dialysis facility for the poor patients, which had been withdrawn in the tenure of dictator Musharraf and his cronies. He said that machinery had been airlifted into the country for the purpose. He said that billions of rupees had been provided by him from his discretionary fund for the liver and kidney transplant of poor and deserving patients. He said that air-conditions had been installed for the benefit of the poor patients in hospitals at a cost of Rs 2 billion. He said that there was a need to remove the disparity between the rich and the poor in the provision of medical facilities and it was possible only if the government and doctors made joint and sincere efforts to improve the healthcare system. He said that a country where free treatment was available to the president, prime minister, chief ministers, ministers, generals, judges, and politicians, while the poor were denied even basic health facilities, could not be called an Islamic welfare state.

He said that doctors, paramedics and nurses had worked round the clock during the outbreak of dengue, and brought the menace under control through tireless efforts. He said that it was time to sink the bitterness of the past and make collective efforts for the development of the healthcare system and make Pakistan an Islamic-welfare state in the real sense. He said that the sad incident in Gujranwala had tarnished the image of the health sector, and the demands of justice would be fulfilled. “The state plays the role of a mother and the government has good intentions. It has taken effective and sincere steps for the uplift of the health sector.”

Shahbaz said that the salaries of doctors, paramedics and nurses had been increased and reforms were introduced in their service structure. He said that young doctors were the shining stars of the health sector and provision of the best treatment facilities to the patients was their prime responsibility. He said that the problems of doctors would be solved so that they could serve the ailing humanity with a peace of mind.

Referring to the steps taken by the Punjab government for the promotion of simplicity, he said that an austerity committee had been established for the purpose. He said that no new vehicle had been purchased for the Chief Minister’s Secretariat and when his helicopter was out of order, he instead of spending money on the new helicopter, utilised the funds for extending facilities to the masses. He said that the Balochistan and the federal governments had purchased helicopters and aeroplanes with billions of rupees. He said that the Punjab government had spent funds for the service of the people, considering national resources as a sacred trust. “No doubt mistakes have been made, but it is time to learn from them and move ahead for the improvement of the healthcare system.”

The chief minister said that class discrimination would have to be eliminated for making Pakistan an Islamic-welfare state in letter and spirit and to make sincere and collective efforts for this purpose. He said that cooperation of doctors was essential for the development of the healthcare system and to deal with new challenges in the sector. – Dailytimes