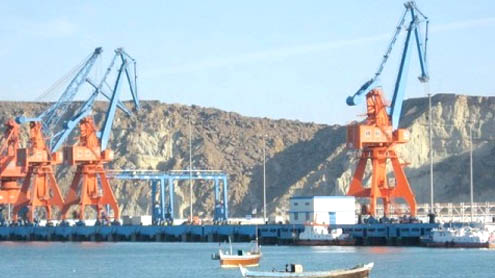 ISLAMABAD: Chinese Ambassador to Pakistan Liu Jian has maintained that no one should be worried or annoyed by Pakistan’s handing over Gwadar Port to China.

Talking to Nawa-i-Waqt at a function here, the foreign dignitary disclosed that the agreement regarding the transfer of management of the deep-sea port was to be signed on Monday (today).Jian said no third country should have reservations over this bilateral arrangement which had been decided by Pakistan and China mutually. About India’s criticism and concerns regarding the handing over of the port, he replied that no country should have apprehensions over Pak-China cooperation. “This bilateral arrangement is in the economic interest of the peoples of China and Pakistan,” he went on to say. Asked that certain countries were thinking China would use this port for military purposes, the diplomat said this hypothesis was absolutely baseless.

To another query that whether China was worried because of the law and order situation in Balochistan, Jian said security was the responsibility of the Pakistan government. He said at present China had been working on at least 120 different projects in Pakistan; the government had given them security and they were not worried at all.Asked if the change in government in Pakistan after the elections would have any impact on Pakistan-China ties, the ambassador said the friendship of the two countries was time-tested. “The leadership changed in China, but it did not impact the bilateral ties and friendship between the two states.”

Jian further said China wanted Pakistan’s solidarity and economic development and it would continue helping it. He was of the view that Pakistan should give more attention to its economic development, saying that Gwadar Port would play an important role to this end. He also said that China did not want any clash with any country because it had diverted its total attention to economic development.AFP adds: China’s acquisition of strategic Gwadar Port is the latest addition to its drive to secure energy and maritime routes and give it a potential naval base in Arabian Sea, unsettling India. The Pakistani cabinet on Jan 30 approved the port’s transfer, a commercial failure cut off from the national road network, from Singapore’s PSA International to the state-owned China Overseas Port Holdings Limited.

The Pakistanis pitched the deal as an energy and trade corridor that would connect China to Arabian Sea and Strait of Hormuz, a gateway for a third of the world’s traded oil, overland through an expanded Karakoram Highway.Experts say it would slash thousands of kilometres off the distance oil and gas imports from Africa and the Middle East have to be transported to reach China, making Gwadar a potentially vital link in its supply chain.

China paid about 75 per cent of the initial $250 million used to build the port, but in 2007 PSA International won a 40-year lease with then-ruler Pervez Musharraf who was reportedly unwilling to upset Washington by giving it to the Chinese.Andrew Small, an expert on China-Pakistan relations, told AFP “In the near-to-medium term, it appears that China’s interests in this part of the world lean far more towards developing capacities to deal with threats to sea lanes of communication, Chinese citizens overseas and so on.”

Plenty of Indian naval strategists are highly sceptical of the likelihood of many of the locations… actually being used as military facilities by China.”But Small does believe that Gwadar is the most mostly likely port to be developed by China for use by the Pakistan Navy, and potentially their own.”Pakistan is probably the only government where the level of trust between the two militaries is high enough to make that a completely reliable prospect,” he said.

Other Pakistani experts suggest that Islamabad is more likely to give the Chinese navy access to its existing naval bases of Karachi or Qasim. “China can always use those. So they do not have to build another naval base at this stage,” said Hamayoun Khan, who teaches at the National Defence University in Islamabad.Fazul-ul-Rehman, former director of the China Studies Centre at the Institute of Strategic Studies Islamabad, dismisses the prospect of China going to war in the Indian Ocean and calls Indian concern “propaganda”.But he says China has become more cautious about big investment projects in Pakistan due to security concerns. Taliban, sectarian and separatist violence blight Balochistan. – Nation