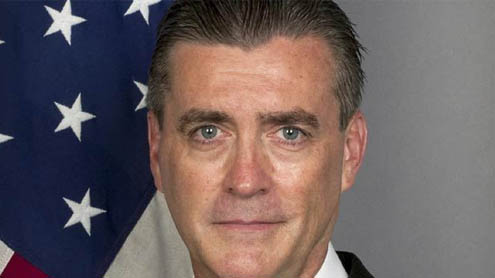 SUKKUR: US Ambassador Richard Olson said on Wednesday that his country was assisting Pakistan in different sectors — including education, health and energy.

Speaking at the foundation stone-laying ceremony of a hospital in Jacobabad, he said the US was committed to working with Pakistan to undertake innovative projects to strengthen healthcare system in the country.He said the US was delivering on that commitment by launching construction of the Jacobabad Institute of Medical Sciences.He said the 133-bed hospital would be built at an estimated cost of $10 million in two years to provide modern health facilities to the people of upper Sindh and adjoining areas of Balochistan. It will offer outpatient treatment, emergency, diagnostics and surgery facilities and specialised services in its mother and child healthcare centre and intensive care units.

Mr Olson said the USAID would provide latest equipment and solar energy system for the hospital.He said the agency had undertaken a project to improve efficiency and performance of the staff of the Hyderabad Electric Supply Company and the Sukkur Electric Power Company.The project was aimed at minimising line losses of the two companies and enabling them to improve their supply system, he said.He said the USAID would help increase power generation capacity of Jamshoro Thermal Powerhouse to 150 megawatt and of Guddu Thermal Power Station to 75MW after which both they would be able to energise 510,000 houses. He said the USAID would also extend support to introduce Pakistani livestock and handicrafts at international level.

PPP MNA Mir Aijaz Hussain Jakhrani said Pakistan was fighting the war against terror jointly with the US, adding that more than 35,000 Pakistani soldiers and people had sacrificed their lives in the conflict.He urged the US to do more in education and health sectors of Pakistan as extremism could be eliminated only through education.Sindh Minister for Health Dr Sagheer Ahmed and Minister for Rehabilitation Haji Muzaffar Hussain Shujra also spoke on the occasion.Earlier, MNA Jakhrani presented traditional gifts of Sindhi cap and Ajrak to the US ambassador and US Counsel- General in Karachi Michael Dodman.Ambassador Olson is on a two-day visit of upper Sindh during which he is scheduled to visit historical places and meet political leaders, civil society activists, students, traders and industrialists. – Dawn