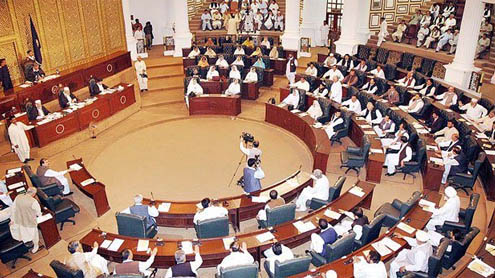 PESHAWAR: Inflated payments for meals served at official functions of the Khyber Pakhtunkhwa Assembly have brought to spotlight the misuse of the taxpayers’ money of the province.

During meeting of the assembly’s finance committee here, it was revealed that contractors had charged Rs6,000 and above per head for buffets and dinners served in official functions organised by the speaker.A member of the committee told Media that the approximate rate for lunch and dinner in the provincial capital’s five-star hotel and restaurants was Rs1,500 per head.He said normally, Rs2,500 were charged per head for dinner or lunch including catering charges at official functions arranged outside restaurants or hotels.

“A maximum of Rs1,500 are charged per head at restaurants but we never heard about payment of Rs6,000 or above,” he said, adding that the assembly had issued strict directives to take austerity measures to curtail expenditure, but the secretariat staff ignored it.He said the officials concerned were unable to explain overpayment to the contractors and hoteliers. The committee ordered inquiry into payment of Rs300,000 for dinner at a local hotel.The committee’s members, who met here at the assembly secretariat on Monday, expressed serious reservations about overpayment to the hotels, refused to give clearance and ordered inquiry into them.

Speaker Kiramatullah Khan Chagharmatti presided over the meeting, which lasted five hours.The task was handed over to finance minister Hamayun Khan and MPA Abdul Akbar Khan to verify the bills under which extra amount had been paid to hotels.Speaker Chagharmatti, who arranged function at his official residence last week, told the committee that he would pay Rs40,000 from his own pocket to meet expenses on the function.“When members started grilling officers for overpayments, the speaker said he would bear expenditure of the function,” said a source privy to the meeting.Another example of the flagrant misuse of the taxpayers’ money was repair cost of the speaker’s bulletproof vehicle.

Insiders said a receipt presented in the committee’s meeting showed that Rs550,000 had been paid to the mechanic for repairing brakes of the bullet proof vehicle. Members of the committee disagreed and observed that the payment would be subject to verification.Sources said the committee deferred up gradation of around 40 employees of the assembly secretariat and directed that promotion of the officials to next grade be made subject to the prescribed policy of the government.Member of the committee Mohammad Ali Shah Bacha when asked for deferring up gradation of the officers and employees of the assembly secretariat said they were in favour of invoked up gradation policy for the promotion of staff.

Officials said Saeed Khan, secretary to speaker, requested up gradation of his post from BPS-19 to BPS-20. They said Mr speaker had also expressed the desire for up gradation of his junior security guard.They said the speaker wished to promote the incumbent Sergeant-At-Arms of the assembly presently from BPS-18 to BPS-19.According to comparative statement of the security staff of the four sister assemblies, including Punjab and Sindh, chief security officers were serving in BPS-18 and BPS-17, respectively. – Dawn