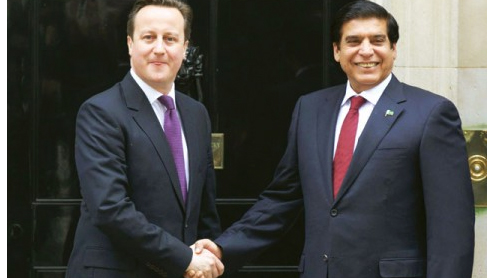 During the meeting, the two leaders discussed matters of bilateral interest including the aftermath in Afghanistan following the withdrawal of NATO troops. Prime Minister Ashraf also asked his British counterpart to give military hardware to Pakistan.During the meeting, Prime Minister Ashraf appreciated Britain’s role in helping Pakistan promote education and healthcare.British Prime Minister Cameron said Pakistan had made huge sacrifices in the war against terror, adding that Britain would continue to stand by Pakistan to carry on the Enhanced Strategic Dialogue.

Both the prime ministers also discussed matters of mutual interest and ways to enhance trade relations between the two countries.The two leaders held the meeting at the 10 Downing Street – the official residence of Prime Minister Cameron, on the invitation of the latter, and reiterated their desire to further strengthen bilateral bonds and cooperation in diverse areas.Prime Minister Ashraf describing his talks with British prime minister, which lasted beyond scheduled time, said “It went very well.”

Thanking the British prime minister for his keen interest and proactive role on the issue of Afghanistan, Prime Minister Ashraf reiterated that Pakistan desires a peaceful and stable Afghanistan. Pakistan, he said, is working closely with Afghan High Peace Council so that all stakeholders are on board and steps taken are beneficial and reinforcing.The prime minister stressed the need to build up the Afghan security forces during the transition period so that they can take up responsibilities.During the talks, the British prime minister reiterated “Your friends are our friends, and your enemies are our enemies”.

Prime Minister Ashraf thanked British premier for his country’s support on the issue of securing GSP plus status for Pakistan from the EU countries.He also appreciated the assistance being extended by the United Kingdom in the development of health and education sectors in Pakistan.Expressing satisfaction over bilateral relations between the two countries, both the leaders expressed confidence that they looked forward to a far greater cooperation during transition in Afghanistan.

Ashraf apprised Cameron of the investment opportunities in Pakistan and the economic reforms and policies initiated by his government to facilitate investors by providing conducive environment.Cameron, commenting on improving ties between India and Pakistan, observed that “there was need to open market to harvest economic bonuses”.Ashraf said that Britain has proved it to be a friend of democratic Pakistan.Cameron, hailing the recently concluded trilateral meeting, said that Pakistan’s role was constructive and he would be visiting Pakistan this summer to carry the process forward.

Earlier, addressing a gathering of Pakistani diaspora at a dinner hosted by Shaukat Saleem in the honour of prime minister, Raja Pervaiz Ashraf on Tuesday said that national and provincial assemblies would be dissolved within few weeks to pave a way for holding free, fair and transparent elections in the country.The premier said that the future of Pakistan was connected with impartial and fair elections and unfettered democracy.

First Lady, Nusrat Pervaiz Ashraf, Pakistan’s High Commissioner to UK Wajid Shamsul Hasan and President PPP (UK) Hasan Bukhari were also present on the occasion. Eulogising the much-needed contribution of the overseas Pakistanis in the development and prosperity of the country, the prime minister said that the present dispensation would again introduce a bill in the parliament to give right to Pakistani Diaspora of participation in the general elections.Raja was of the view that if overseas Pakistanis are allowed to cast their votes, they should also be permitted to seek votes in the general elections.

“Pakistani people, struggling abroad, are very diligent, hard working and resilient and represent the country in a graceful manner. Overseas Pakistanis from different parts and remote areas of Pakistan, struggle abroad to create respectable space and place, which is a source of pride for the country,” he said.The prime minister said that he was grateful to Almighty Allah for his ascent to the position of premiership. Expressing thanks to President Asif Ali Zardari and Chairman PPP Bilawal Bhutto Zardari for reposing their confidence in him, Raja said he belonged to rank and file of the party and rose to this position by the grace of Allah.

The PM said that the status of “United Kingdom as the mother of parliaments was not secured over night, rather long struggle had been waged to rope in this place. Pakistan is blessed with numerous resources, a population of over 180 million people and rich culture”.The PM said that fight against terror had changed political dynamics of the entire world. He said that it was difficult to ascertain whether being a party to a war on terror was a wise decision on part of Pakistan or not. He said he saluted all those who sacrificed their lives for the cause of Pakistan.

He said when PPP was voted into power in 2008, a meeting of all political parties within and outside the parliament was convened along with heads of armed forces to resolve the issue of terrorism. He said that all stakeholders unanimously decided that the entire nation would stand behind the armed forces against war of terror.“In Swat where there was no writ of law, the armed forces launched an operation and laid down their lives. Normal conditions were restored and 2.5 million IDPs were repatriated back to Swat,” he said.

The PM said that Shaheed Zulfikar Ali Bhutto introduced adult franchise in 1970 and people were allowed to cast their votes to whom they wished to be in power, adding that Bhutto also laid the foundation of Pakistan’s nuclear programme. The PM said that Bhutto also initiated other important mega projects like Pakistan Steel Mill, Kamra project, Heavy Mechanical Complex and self-respect of common man had been restored.The prime minister told the overseas that Pakistan was passing through the evolutionary phase, but the common man would ultimately be reaping benefits of the democracy. Referring to the role of media in Pakistan, he celebrated that around 100 news channels were functioning freely.

The PM underscored that the present assemblies of Pakistan would be the first in history to complete their constitutional tenure. Commenting on the historical ‘power friction between the presidency and the parliament, he said that “Asif Ali Zardari had been elected as president with an overwhelming majority, but he voluntarily returned his powers to the parliament in the supreme interest of democracy and country. The president had realized that his real strength in fact rested with the democratic system that was why, he transferred all powers to parliament and the elected prime minister.”

The PM said that the present regime paved way for providing assembly to Gilgit-Baltistan, renamed NWFP as KPK and demands for new provinces were gaining momentum. He said, “Small provinces can be managed administratively in a better manner, but these issues are also being politicised unnecessarily and the people should not get frustrated over such problems.”The prime minister concluded his speech by praising the positive role of British Prime Minister David Cameron for getting access for Pakistani products in the EU markets.Pakistan’s High Commissioner to UK, Wajid Shamsul Hasan, also spoke on the occasion.