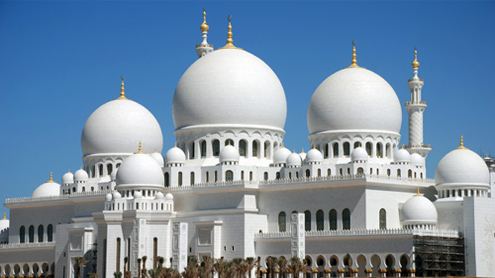 The Shaikh Zayed Grand Mosque, which welcomed over 4.6 million visitors and worshippers in 2012, joined a line-up of 16 global attractions to make the list, which included Sydney Harbour, Sydney, Australia; The Colosseum in Rome, Italy; The Eiffel Tower in Paris, France; Table Mountain in Cape Town, South Africa; and Central Park in New York, USA.

The SZGMC offers complimentary guided tours by UAE national professional guides, who lead tours for visitors daily offering insights into the construction of the architecture, its founder, the late Shaikh Zayed bin Sultan Al Nahyan (may Allah rest his soul in peace) and the Islamic culture of the building.Featuring 82 domes, over  1,000 columns, 24-carat-gold-gilded chandeliers and the world’s largest hand-knotted carpet, the mosque’s main prayer hall is also dominated by one of the world’s largest chandeliers — 10 metres in diameter, 15 metres in height and weighing 12 tonnes.  The mosque was opened for worship and visitors during Eid Al Adha in 2007.