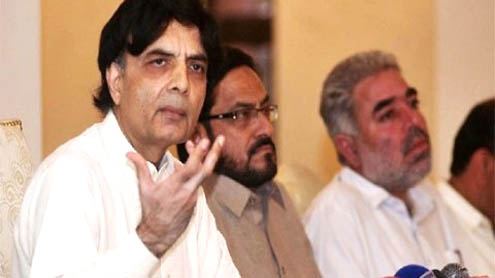 ISLAMABAD: Leader of the Opposition in National Assembly Nisar Ali Khan on Friday said the opposition had reached consensus on two former Supreme Court judges out of eight names for the caretaker prime minister.

Taking a jab at the Pakistan Tehreek-e-Insaf (PTI) in a press conference, he said Imran Khan’s party had now become Pakistan Tehreek-e-Tazaad (contradictions).Nisar said the opposition had considered eight names for the coming caretaker setup, adding that consensus had been developed on names of two former Supreme Court judges — Nasir Aslam Zahid and Shakirullah Jan. He said no backdoor diplomacy or negotiations with the government were under progress on the issue of the caretaker setup. Nisar clarified that it would be the decision introduced by the opposition to dissolve the Punjab Assembly and no one else had the mandate to make such decisions.

The opposition leader said the “PTI had earlier supported the chief election commissioner and the election bill and Imran Khan had shown full faith in Fakhruddin G Ebrahim. Now he has reservations just like Tahirul Qadri”.Nisar said, “The PTI always boasted of not forming any allegiance with any party, then why is it tilting towards Tahirul Qadri all of a sudden.”

He further blamed the PTI for accepting former president Pervez Musharraf in the past and his chosen election commissioner Irshad Hussain Khan, whose eligibility was questionable as he had postponed elections for three years and allowed amendments in the constitution. “The TMQ, PTI and PML-Q want to postpone elections, therefore, they are bringing up all these reservations.”

The opposition leader reminded media about the issue of Justice (r) Irshad Hussain, saying that the three parties observed criminal silence over the issue and accepted then military dictator Pervez Musharraf and the then controversial “imported” prime minister. “Imran Khan cannot bring a tsunami in a teacup and PTI has become a party of contradictions rather than a party of justice.”

The senior PML-N leader was of the view that the government had vowed to bulldoze the House with the Higher Education Bill at the eleventh hour and his party would oppose the move as it was not in the interest of the nation. Nisar said the PML-N would bring its own bill on the new provinces and the homework had been completed for the purpose. “No more controversial bills would be tolerated anymore,” Nisar added. – PT