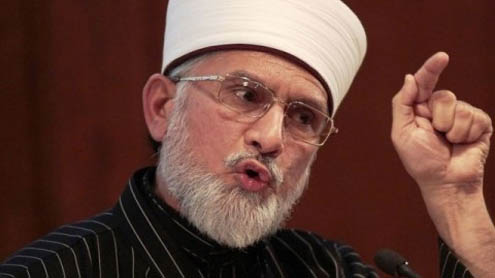 ISLAMABAD: Dr Tahirul Qadri Thursday submitted a constitutional petition in the Supreme Court seeking immediate reconstitution of the Election Commission of Pakistan (ECP) in accordance with the constitution so that truly free and fair elections could be held ‘on time’.

The Minhajul Quran chief prayed the court to declare void ab-initio the appointments of Chief Election Commissioner (CEC) and the four ECP members for their being not in accordance with articles 213 and 218 of the constitution. He also filed an application praying that until a decision on his petition, the CEC and the ECP members should be barred from functioning.The ECP reconstitution plea was filed under Article 184(3) of the constitution, making respondents the federation, the ECP, Parliamentary Committee of the National Assembly and Law and Parliamentary Affairs secretary.

Qadri prayed court to direct the federation to urgently appoint new CEC and other members of the ECP as per the procedure laid down in articles 213 (2-a) and 218 (2-a,b) so that the upcoming elections may not be delayed on any pretext. He contended that existing CEC and ECP members have not been appointed as per the constitutional procedure, so their appointments were illegal.

He said that clause 2a of Article 213 envisages a mandatory ‘hearing’ by the relevant parliamentary committee before anyone’s ‘confirmation’. This clause also requires the PM and the leader of opposition in the NA to forward three names for appointment of CEC to the parliamentary committee, he said. Article 218 2(b) relates to the appointment of four ECP members to be appointed by the President in the manner provided for CEC’s appointment, he added.

The CEC and the commission members could only be removed in the manner as of the judges of the Supreme Court as given in Article 209. But Dr Qadri opined that such security of term of office has been over-ridden in the removal of Justice Sajjad Ali Shah as CJP, Irfan Qadir as NAB PG and Justice (r) Deedar Hussain as NAB chief, while many judges were removed for having taken oath on or after 3-11-2007 or appointed in consultation with Justice Abdul Hameed Dogar.

The TMQ chief contended that to invoke the relevant provisions of the constitution, it needs to be ascertained as to whether the parliamentary committee had called for hearing the nominees for the post of the CEC or ECP members before its recommendations of confirmation. He said that record of the proceedings of the committee should be procured for perusal. – Nation