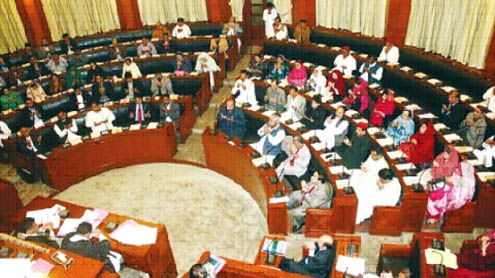 The opposition lawmakers led by the PML-F resisted the passage of bill which, they claimed, would serve well to favour the government’s cronies. The PPP-led treasury contended the law was to encourage the police officials for protection of the masses.Despite a huge pandemonium in the provincial legislature, the bill was adopted with opposition staging a walkout amid shouts of “shame shame”. Thursday saw the two divides exchanging barbs over the “controversial” bill with Arif Mustafa Jatoi of NPP contending that the house could not legislate on an issue which was pending before the court.

Interestingly, the debate left the two ANP lawmakers divided on the issue as Labour Minister Amir Nawab backed the bill while his only party fellow Amanullah Mehsud, sitting on opposition side, walked out in protest against the proposed law.Jatoi was the first to take the floor to voice against the bill saying making laws on sub-judice matters would render the house committing the contempt of court under the Constitution. Citing articles 66 (1) and 204-2 (C), the NPP lawmaker said the legislation in the Assembly had no legal ground.

Jatoi referred to a court hearing on the promotion of civil servants saying the legislature could not take up the matter until the Supreme Court decides it.This made Sindh Law Minister Ayaz Soomro taking the floor who termed Jatoi’s concern as baseless. The minister claimed that there was no constitutional bar on the assemblies to legislate on any issue. Soomro also showed his ignorance of any court order staying the promotion of police officials through legislation.

The party parliamentary leader of MQM, Sardar Ahmed, also put his weight behind the law minister saying the Assembly could not be charged with the contempt of court.Soomro said the assemblies were meant to legislate and no court of law had ever prevented them from accomplishing their constitutional obligation.He also read out Article 137-IV of the Constitution supporting his view. “No one but the lawmakers themselves can deny our right to legislate,” he emphasised.

Another PPP stalwart, Rafiq Engineer, read out Article 69 supporting Soomro’s point. MQM legislator Sardar Ahmed added that a stay order could only bar the Assembly from making laws on an issue.The MQM leader said a recent court order on local bodies’ election in the country had clearly put the ball in the assemblies’ court.The law minister said while the legislatures were to make laws the courts were meant to interpret the same as per constitution.

The treasury was indifferent when Jam Madad Ali Khan of PML-F proposed referral of the controversial bill to the concerned standing committee saying the body should revisit legal lacunas from the proposed law.He warned against a hasty passage of the bill calling upon the government side to consult the opposition before tabling it in the house.Seeing his calls falling on deaf ears on the treasury benches, the PML-F leader termed the bill as a move to favour some of the government’s blue-eyed boys that, he claimed, included the law minister’s two brothers. Soomro’s brothers, Khan, alleged were to be promoted under the new law.

This fell heavily on lawmakers on the treasury side who lashed out at the opposition members also hurling high-pitched remarks on them.When the rumpus intensified, Dr Sikandar Mandhro who was in the chair, gave the ruling that the bill could well be legislated upon in the absence of a constitutional bar.Later, while the opposition was all out to debate the bill, Deputy Speaker Shehla Raza allowed the law minister to move a motion for tabling the proposed law.

This attracted slogans of “shame shame” from the opposition lawmakers who then walked out of the house to register their protest. Some of them also slashed copies of the bill.The house subsequently adopted the bill with the law minister clarifying Khan’s allegations about his brothers’ promotion and saying his siblings were being promoted on the court’s order as they were subjected in the previous government to political victimisation.

“The law enforcement personnel of Sindh Police in the past have risked their lives and exhibited exceptional acts of gallantry in the line of duty. Therefore, in order to retain the morale of the force, it is expedient to make certain amendments in the Sindh Civil Servant Act, 1973,” reads the bill’s statement of object.During the opposition’s boycott, the PPP-dominated house passed the Sindh High Density Development Board (Amendment) Bill 2011 while deferring two other bills, Sindh High Education Bill 2013 and Sindh Education City Bill 2012, till next session.Terming changes in the Sindh High Density Development Board Act, 2010 as expedient, the treasury members said the amendment bill was aimed at creation of effective mechanism in high-rise buildings.The house will meet again on Friday 10am. – PT