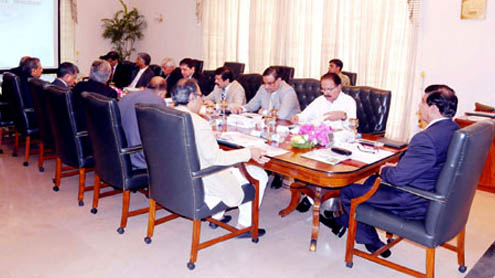 Presiding over the 6th BoI Board meeting here at the PM Secretariat, the Prime Minister said the BoI should be further strengthened.He said that it was ironic that Pakistan, which had one of the best investment policies on paper, failed to attract foreign investment.The BoI Board in its meeting held an in-depth discussion on waysand means to attract investment in the country which is critical tothe growth of economy.The Prime Minister said that the present process of approvalof projects was cumbersome and involved a large number of departments before a project could see the light of the day.

This,he said, was discouraging investors and needed to be simplified.”We need to work on a one window system where the investor canbe provided all necessary information and facilities”, remarked thePrime Minister.He directed the bureaucracy to work on simplification of procedures by revisiting the existing processes without compromising on transparency so that the investors were comforted.

Representatives of the private sector assured the Prime Minister that they were prepared to share their experience andexpertise to ensure implementation of government’s investment-friendly policies.The minutes of the 5th BOI Board meeting, appointment ofprofessionals and details of expenditures incurred from Board ofInvestment fund so far were confirmed during the Board meeting.

The Board also discussed Investment Policy 2013 which wasd rafted by the Board of Investment in consultation with all stake holders. Similarly, the Board also discussed a draft Strategic Policy 2013-2017.It was also resolved during the Board meeting after detailed discussion that the draft Investment Policy 2013 and Investment Strategy 2013-2017 would be sent to the Cabinet.The meeting was also attended by Minister for Finance Dr.Abdul Hafeez Shaikh, Deputy Chairman Planning Commission Dr. Nadeemul Haq, BOI Chairman Saleem H Mandviwala and other senior officials. – Brecorder