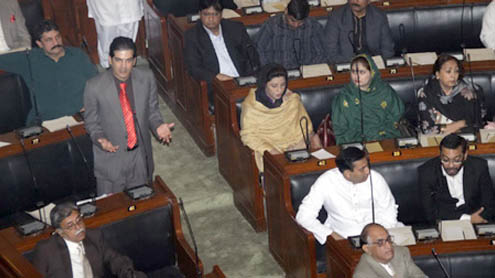 KARACHI: An opposition lawmaker from the National People’s Party (NPP), Arif Mustafa Jatoi on Wednesday questioned performance of the provincial ministers in the Sindh Assembly, saying they had failed to reply of 74 percent of the questions asked by the lawmakers regarding their departments and matters pertaining to their ministries during last five years.

Sharing a performance report of assembly ministers compiled by him with media outside the assembly, the MPA said that the lawmakers had asked around 11,088 questions till November 26 last year during the tenure of sitting government, and they received answers of only 3,056 questions by the departments concerned.

About the Home Department, he stated that despite worsening law and order situation it appeared very shocking that the department, for last two years, answered not a single question on law and order. According to him, the Human Rights Department remained the only department that did not answer any of the questions during the period.“This is very poor reflection on the government’s sincerity towards open government and the democratic process. If they (ministers) are not prepared to answer questions raised by the elected representatives, what a common man can expect of their representatives after their dismal performance”, he asked.

He added that the key departments, where corruption is thrived, including Land Utilization and Revenue had also been evaded from accountability in the assembly. He said that even the department controlling corruption, the Anti-Corruption Department, had only answered 17 questions on the floor of house during the said period.Jatoi said that accountability of the government to parliament was the foundation of open and transparent government in any democracy. But, he added, the incumbent government had clearly not presented all its departments and ministers for public scrutiny. This is very disappointing reflection on a ‘people’s government’, he remarked.

He told that he brought this report after he get failed in convincing the Speaker, Nisar Ahmed Khuhro for releasing performance report of each department. According to him, top five departments who have shown the worst performance on this count include Human Rights, Rural Development, Youth Affairs, Cooperation, and Population Welfare. He claimed that the five departments, which shown better performance, were Home, Local Government, Education, Agriculture, and Irrigation.

He said the Health and Finance departments remained more disappointing as ‘both are headed by highly competent, extremely well educated and well-known ministers’. Both departments have not answered to any question during three parliamentary years out of total five years, he added.Talking about the Population Welfare Department, he stated that the province and the country suffer from one of the highest population growth rates in the world with dire consequences for the country in terms of water and scarcity, unemployment, food scarcity, and social unrest but this department had answered a mere six questions during around five years period.

Homage to Dr Shah: The Sindh Assembly offered Fateha for ex-MPA Dr Muhammad Ali Shah, advisor Sindh for Sports and adjourned the sitting to pay respect to the departed soul.The second sitting of 40th session of Sindh Assembly was held here with Deputy Speaker Syeda Shehla Raza in chair.Sindh Law Minister Muhammad Ayaz Soomro and members from all political parties requested the acting speaker for offering Fateha for the departed soul. They also requested the deputy speaker to adjourn the session to pay homage to deceased Dr Shah.The assembly offered Fateha and as per its tradition adjourned the session to pay homage to Dr Muhammad Ali Shah, without carrying out further business to Thursday, February 7, 2013. – DailyTimes