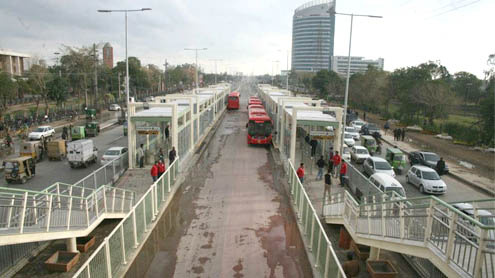 LAHORE: Punjab Chief Minister Shahbaz Sharif has said that the metro bus is a splendid public-welfare project, which is a glorious example of Pak-Turk friendship.

Presiding over a high-level meeting regarding the project in Model Town, the CM said that every project of the Punjab government was a living proof of transparency, merit and standard.He said that a new history had been made by working day and night on the project and labourers, contractors and authorities concerned had achieved an impossible task. He said that the Metro Bus Service would be free for the people during the first four weeks.

The meeting reviewed the pace of work of the project in detail. The chief minister said that the project would bring about revolutionary changes in the transport sector and modern, comfortable and economical travelling facilities would become available to the masses.He said that the project had been completed as a noble mission and it was the most important project with regard to standard, transparency and speed in the history of the country.He said that the bus project would be inaugurated on February 10 at a simple but graceful ceremony, and arrangements were being finalised for this purpose.

Shahbaz directed the officials concerned to make sure that security, traffic and other arrangements were excellent for the inauguration ceremony of the project.He said that the project was a gift to the people, which would completely change the public transport culture. He said that the metro bus project would bring happiness and relief to the people who had extended commendable cooperation in the execution of the project.The CM also thanked Turk President Abdullah Gul, Prime Minister Tayyip Erdogan and Istanbul Mayor Kadir Tobpas for their cooperation for the project.