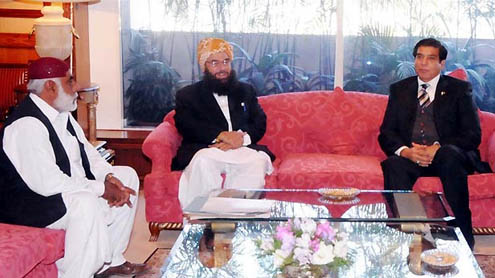 ISLAMABAD: Efforts led by the Jamiat Ulema-i-Islam (Fazl) to get the governor’s rule in Balochistan lifted appear to be getting the required support from the quarters concerned.

Prime Minister Raja Pervez Ashraf assured a three-member delegation of JUI-F on Wednesday that the party’s proposal to restore the Balochistan government with a new chief minister would be given a serious consideration.The delegation led by Senator Abdul Ghafoor Haideri and including Senator Hafiz Hamdullah and former senator Ismail Buledi held a detailed discussion with the prime minister on the issue.

Talking to Media after the meeting, Mr Hamdullah said the prime minister was quite receptive to his party’s suggestion of restoring the provincial government which had been suspended after imposition of governor’s rule on Jan 14. “We have been assured by the prime minister that the issue will be taken up with President Asif Ali Zardari,” he said.The senator said the JUI-F from day one had been opposing the governor’s rule which, if not lifted immediately, would only add to the problems being faced by the province at a time when elections were round the corner.

The JUI-F’s efforts to get the Balochistan government restored received a boost on Tuesday when dismissed chief minister Nawab Aslam Raisani reportedly submitted his resignation to Maulana Mohammad Khan Sherani, a JUI-F senator and chief of the party in Balochistan.The JUI-F has offered the PPP and its coalition partners to bring in a replacement of their choice for Nawab Raisani or let it nominate a new chief minister.

Senator Hamdullah said the government had imposed the governor’s rule in haste which, according to his party, lacked constitutional cover.If the provincial government had been removed on charges of lawlessness or internal disturbances in Balochistan, President Zardari should have invoked Article 232 of the Constitution. Instead, Article 234 had been used which was about failure of the constitutional machinery, he pointed out.

Meanwhile, the Majlis Wahdatul Muslimeen (MWM), a Shia community group that had forced the federal government to impose the governor’s rule, has of late shown flexibility on the matter.An MWM source said the party had decided, for the sake of democracy, not to oppose a move by the centre to restore the provincial government with a new chief minister.

A press release issued after the prime minister’s meeting with the JUI-F delegation quoted Raja Ashraf as saying all political forces in Pakistan were on the same page to strengthen democracy in the country. The politicians had learned that the democratic process must not be interrupted at any cost.“It is the fundamental right of all citizens to choose representatives of their choice through vote and this right shall neither be delayed nor denied.” – Dawn