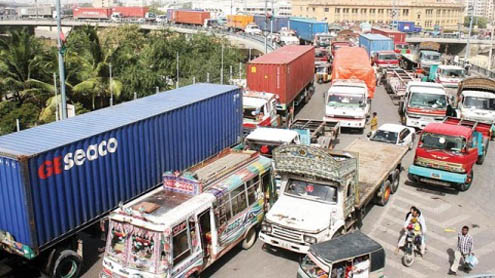 KARACHI: In pursuance to the emerging dispute between shipping companies and the transporters, a meeting was called by the Chairman Karachi Port Trust (KPT) Jawed Hanif Khan at KPT Head Office, which was attended by Pakistan Ship Agent Association (PSAA) members and transporters, apart from the KPT operations team.

The purpose of the meeting was to resolve the dispute and the efforts of KPT, led by Khan, paved way for it after a long meeting, which started during the late hours on 4th February 2013, and ended after 12:00 am, says a release here Tuesday.It was decided that from 6th February 2013, PSAA members would start collection of empty Lift On-Lift Off (LO/LO) charges at their offices and no cash transaction would be carried over by transporters at the terminals.

With regards to the export empty LO/LO charges, it was discussed and demanded that LO/LO charges would be taken by the shipping companies at the time of issuance of Bill of Lading.The shipping agent representatives were of the opinion that they required proper authorisation from their members and for that matter they opined with confidence that the matter could be resolved. Moreover, it was decided that the understanding reached there would be applicable on fresh import/export containers from 6th February 2013.