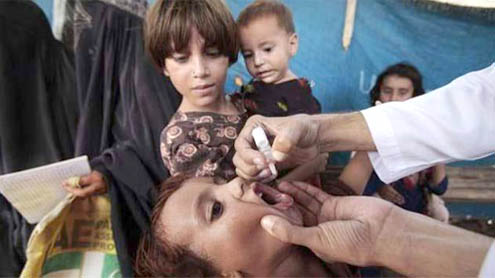 PESHAWAR: Islamic Development Bank has approved $251 million loan for Pakistan’s polio eradication programme following the donor agencies’ refusal to offer funding, according to the relevant officials.The $300 million programme, which is for 2013-15, seeks complete vaccination of children to ensure eradication of the crippling disease in the next three years.“Pakistan has designed its own polio eradication programme for the next three years after donor agencies refuse to provide further anti-polio funding. The three-year programme will cost $300 million of which $49 million will be arranged by the government, while the rest will be provided by IDB,” an official said here on Monday.

According to him, the loan is a welcome development at a time when the international donors have expressed their inability to pump more money into Pakistan’s anti-polio programme.The official said the government had requested the Jeddah-based IDB for loan for its polio eradication campaigns.“Now, it is the government, which will be responsible for all financial liabilities regarding polio vaccination,” an official said.Pakistan has not been able to eradicate polio since World Health Organisation launched Global Polio Eradication Initiative in 1994 when the disease paralysed 3,50,000 children in 125 countries around the world every year.

According to officials, donors say Pakistan has been missing vaccination targets and changing strategies to cope with situation.Donors also insist they have been spending $100 million in Pakistan every year but the vaccine-preventable childhood disease is far from being eradicated.Last year, 58 fresh polio cases were recorded.

In 1997, Pakistan assured the global community that polio would be eradicated by 2000 but cases continued to surface leading to the missing of another deadline in 2004. Thereafter, deadlines after deadlines passed with the latest being that of 2012.The officials said the donors financing polio eradication activities in Pakistan didn’t want to provide the country with more funds for the purpose.They said part of IDB loan would go to WHO and Unicef supporting the government’s polio eradication efforts.

The officials said the UN agencies would get their share from the money for payment to staff involved in polio campaigns at the monitoring or social mobilisation side along with the government.“We have to tell the people that any foreign funding is not involved in the campaign to dispel the impression that the programme is used for getting some hidden objectives, like making recipients infertile and impotent or spying on the Taliban,” an official said.

The official added: “We can allocate this big money to other childhood disease after succeeding in doing away with polio.”He said last year, around one dozen donors had apprised to the government of their inability to fund the programme any further. – Dawn