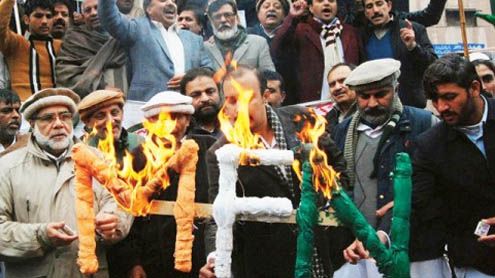 ISLAMABAD: Prime Minister Raja Pervaiz Ashraf has said that Kashmir is not a land dispute between the two states; rather it is the issue concerning over 16 million Kashmiris living on both sides of Line of Control (LoC).

Addressing a function here on Tuesday in connection with Kashmir Solidarity Day‚ he said plebiscite was the right way to give the Kashmiris their right to self-determination. He reiterated Islamabad’s commitment seeking solution to the problem in the light of the United Nations resolutions.The prime minister said Kashmir was a human rights issue and urged the world community to play its role for its resolution. He said India demonstrated intransigence for resolution of the Kashmir issue and was ruling the occupied valley with brute force.

He said though India wanted to normalise relations with Pakistan and desired to have enhanced trade relations, but he made it loud and clear that the unresolved issue of Kashmir was dangerous for lasting peace in the region and the world.Ashraf said Kashmiris were struggling for their right to self-determination and this struggle was intensifying day by day.The prime minister said the objective to observe Kashmir Solidarity Day was to express solidarity with Kashmiris for their right to self-determination. He said support to Kashmir cause was top priority of PPP and it was one of the reasons for creating the party.

Raja Pervaiz Ashraf said the PPP government inherited terrorism, but contained the genie of terrorism to great extent with the support of the masses and the armed forces of the country.About the current water dispute with India, the prime minister said that under the Indus Water Treaty, India could not divert the water of rivers to other areas, adding whenever the neighbouring country violated the treaty international forums gave decisions in favour of Pakistan.

Meanwhile, people across the country and in Azad Jammu and Kashmir observed Kashmir Solidarity Day on Tuesday renewing the pledge to support the cause of Kashmir and its people who are met with violence and hostilities from formidable Indian troops all these years.Rallies, processions and public gatherings were organised across Pakistan in connection with the Kashmir Solidarity Day.

In Islamabad, AJK President Sardar Yaqoob, Prime Minister Chaudhry Abdul Majeed and prominent Kashmiri leaders, including Syed Yousaf Naseem, Faiz Naqshbandi, Raja Farooq Haider, Sardar Attique Ahmed Khan, Barrister Sultan Mehmood and others, participated in different ceremonies. A resolution was presented in the United Nations Military Observer Group in India and Pakistan (UNMOGIP) demanding effective UN role for Kashmir’s independence and against the killings of Kashmiris by Indian army in the occupied Valley.A token sit-in was also staged outside the UNMOGIP office in Diplomatic Enclave but it was called off early due to a heavy downpour on Tuesday.Like every year, a human chain was formed at the Kohala Bridge. – Nation