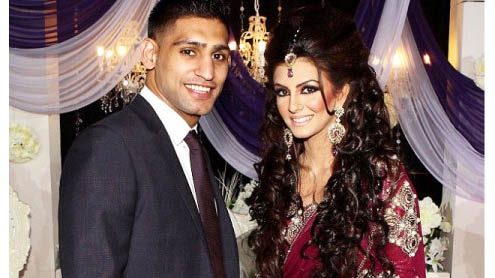 LAHORE: British-Pakistani boxer Amir Khan arrived in the city on Tuesday and spent a busy day, meeting his fans and enjoying shopping with fiancé.

During his visit, Amir visited the Data Darbar shrine where he prayed for his success and for the success of other Muslims across the world. He also spent some time in Rawalpindi before reaching Lahore. Later, he, accompanied by father Shah Khan and brother Haroon, went out for wedding shopping with his fiancé.

Amir said he was a big fan and good friend of Pakistani top class all-rounder Shahid Khan Afidi. “I will invite Shahid to my wedding.” He described Pakistan a safe country. “I was terrified about Pakistan but I can see there is no security issue, no threats to me.”Amir got engaged to Pakistani-American student Faryal Makhdoom on January 29 last year and will get married to her this year in New York.

The boxer had also visited Pakistan in December 2011 to participate as a chief guest in the second Benazir Bhutto International Boxing Tournament. He had said that he will support Pakistani boxers and that he was here to boost their morale. – Nation